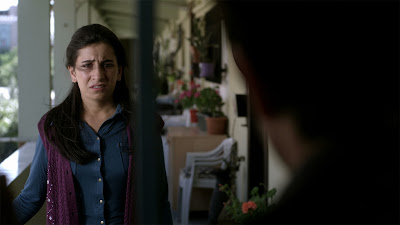 This film will haunt you for hours after you see it. It may hang around the edges of your mind for days. It's one of those films that makes you sit up and go HELLO. It was a film I went into only because it was there and ended up walking out of it with a film high on the must recommend list. Easily one of the best films at Tribeca so far.

When Siyar's sister flees instead of going into an arranged marriage her brother, and man of the house, must go after her in order to kill her and return honor to their family. Its an epic journey of both body and soul as Siyar goes from Kurdish Iraq to Turkey, to Greece, to Berlin and finally Oslo. Along the way things get complicated when Siyar meets Evin, a girl who dresses as a boy and they become friends.

This is a truly epic story that will move you. Even as the film moves toward it's conclusion the film is rarely dark. This is not a brooding film about honor killing, rather it's a film about humanity and the ability to change. If the ending strikes a tragic chord (or series of chords) it's never cheap or out of place. What happens, and it's probably not what you expect, ultimately feels right for a story that is not some Hollywood wish fulfilment.

Possibly, perhaps, maybe, the only bad thing I can say bad about the film is that some of the performances are uneven, but owing to the vastness of the cast and the fact that it appears many are non-actors it's not surprising.

In all seriousness, go see this film. Its a wonderful little confection, extremely bittersweet, but worth tasting. Best of all it will stay with you for days and weeks afterward.

One of the best of Tribeca and one of my finds of the year.
Posted by Steve Kopian at April 21, 2013