Tribeca Day 6- CYCLING WITH MOLIERE, BIG SHOT and REACHING FOR THE MOON plus 2 shorts collections and an interview 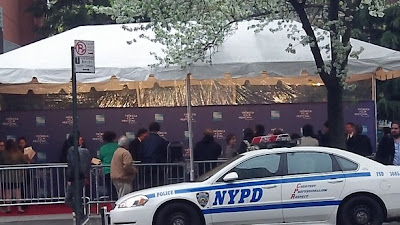 It was a busy busy day and outside of  a butter roll for breakfast and two handfuls of M&Ms during the day I didn't eat until I got home. Along the way I saw 3 features, the HISTORY LESSONS and LET THERE BE LIGHT short collections and I interviewed David Roach and Warwick Ross about RED OBSESSION.

I know it's becoming a bit of a broken record but I'm not going to review the three features I saw but I don't have a great deal to say about them. None of the three were bad, they just didn't create a need to say much.

CYCLING WITH MOLIERE concerns a well known actor who is putting on Moliere's Misanthrope on stage. He's like an old friend who has effectively retired, to join him. Well acted, it's an amusing film but I was in no mood for the film. As someone said during a discussion of the film before my interview "Its a really film but what is it doing at Tribeca? It doesn't belong here 'cause it's only getting lost" Honestly if I wasn't seeing this as something like my 49th or 50th film of the festival I would have loved it, but amongst the mix its gotten lost.

BIG SHOT is about John Spano's 1997 attempt to buy the New York Islanders. It was an attempt that ended in criminal charges. Getting the feeling of being an Islander fan dead right the film wades into the Spano debacle with a great deal of skill... the problem is that at a certain point the film begins to spin it's wheels and you realize that while there is enough material for an hour long documentary there isn't enough for 80 minutes and after a while it feels like there's a great deal of filler. I like the film, I just wish it was shorter.

REACHING FOR THE MOON is a fictionalized account of the romance between  poet Elizabeth Bishop and architect Lota de Macedo Soares. A wonderful romance, where the two leads just happen to be women, this is a story that will touch your heart. Miranda Otto, best known in the US as one of the stars of the Lord of the Rings movies is scary good as Bishop. You would never know she wasn't an uptight American. Worth tracking down.

Into the mix I saw two of the short film collections.

HISTORY LESSONS contains five short films. I saw four of the films. Of the two collections this is the one to see.

A SHORT FILM ABOUT GUNS is an 8 minute film about drug trafficking. As a complete film this is one hell of a trailer for a longer feature. If this can be turned into a feature we could have an Oscar winner. As a short film this is a PSA.

REPORTING ON THE TIMES: THE NEW YORK TIMES AND THE HOLOCAUST is a good look at how the Times covered what became the Holocaust. Seeming  to want to take the Times to task the film presents several people who put the situation in context historically, which weakens it's position.

ROYAL AMERICAN is a love letter to letter writing. What the visuals have to do with anything beyond me. Its an okay film.

Now before the director and producers of WHO SHOT ROCK AND ROLL:THE FILM freak out, I'm going to catch the film in the press library so a review will follow in a day or so (I liked what I saw enough to know I want to see all of it- and hopefully do more than a two line review)


The LET THERE BE LIGHT: THE CYCLES OF LIFE collection is a disaster. Out of all the films in the collection only one is worth seeing. Most of the audience I saw this with walked out.  Most of the films are black and white and look the same..Most involve some sort of strobbing- or seem to.  STARLIGHT No5 is strobbing stars and while I found it hypnotic for a bit, it went on way too long (this one drove out a good number of audience members). THE MOON HAS HER REASONS are flashing phases of the moon. Why? Beats the shit out of me? Actually most of the film had me asking WTF was that and who thought it was any good.

The only good film in the bunch is TWO ISLANDS about two islands off the coast of NYC, one a potter field, the other a land fill. This is a short little film that will haunt you.
After the movies I went over and spoke to David Roach and Warwick Ross about RED OBSESSION.  God bless these guys since they got me in full on fan boy mode.. The interview was supposed to last under 15 minutes I went over by a couple.   I'll post the interview when I get a minute to transcibe it but know that it was an interesting chat, that revealed that since the film was made wine prices have fallen off so much that what would have been a $2000 bottle of wine now goes for under $600.

On the plus side the film is due for release in September and I'm hoping to really be able to sit down and talk to them, especially about their previous movies, which if you know Australian films form a hugely impressive body of work.

Okay off to bed, no really I'm finishing this minutes before the 3AM post time, because I have four back to back to back films in the morning.
Posted by Steve Kopian at April 24, 2013