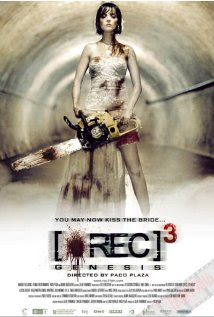 Third in the Spanish horror series was made by only one of the original directors (another film in the series by the other director is coming soon) is best thought of as a film unto it's own and not related to the original series.

The plot has another zombie/demonic out break occurring at a wedding. Instead of an apartment building things are confined to the grounds around a church where the ceremony and the reception are taking place. After a very long build up, running about 25 minutes, consisting of entirely found footage of the pre-ceremony, ceremony, reception and ending at the start of the trouble, the film then shifts to regular narrative story telling for the story of the people trying to survive.

More gory comedy than horror, the film never really generates any tension since much of what happens is more funny than scary. The Rambo like bride is completely over the top as she wields a chainsaw with the greatest of ease.

Its an okay horror film on it's own but as part of the REC franchise-either Spanish or American it's a failure. Worth seeing but as a completely unconnected film.
Posted by Steve Kopian at April 04, 2013