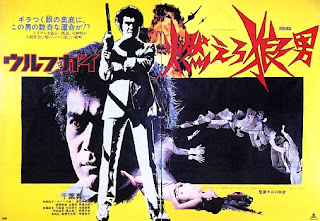 I'm hoping this gets a midnight screening at this years New York Asian Film festival. I don't expect it, or a retrospective of almost equally out there Sonny Chiba films, but one can hope.

This insideous film seems like a normal one but very quickly, despite the the normal surroundings and gangsters goes right off into completely weird territory as we get a man torn apart by an invisible tiger.

Oh what drugs hatched this truly bizarre film and where can I get some?

More importantly why did it take until several people connected with the NYAFF to begin talking about the film before I ever heard of it? I mean I can find almost no reference to the film anywhere until relatively recently.

The plot of the film has reporter (I think he’s a reporter) Sonny Chiba coming upon a man who appears to have been killed by a spectral tiger. At first Chiba is a suspect until the police say that the killer was in fact some sort of spectral force. Hooking up with friend he begins to investigate the matter. Things get crazy as he is chased down by gangsters, rescued by a girl in black leather on a motorcycle who wants sex, finds out that the killings may or may not have something to do with a singer who was gang raped by the gangsters and now has syphilis, and we find out that Chiba is really a werewolf. There’s more, but I’ll let you try to absorb that.

Let me put it this way if you look up WTF in the dictionary one of the top five definitions will be this film.

Out there doesn’t begin to explain it.

I’ve read it’s based on a manga, and it feels like one at times, though another article said that the film was made up on the fly which it also feels like at times. I have no idea what the story is, all I know is it’s weird and fun and a great way to just get away from the world because it is so out there.

Availability appears only to be on the collectors market. All Clues No Solutions (see sidebar) is selling copies from a TV screening complete with commercials and all the violence, blood and nudity intact. What I’m hoping is that either the New York Asian Film festival or the Japan Society will run this because frankly I want to see this with a room full of people just to listen to their reactions.