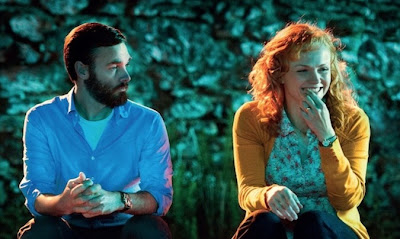 Will Forte plays an American doctor who stays with the Casey Family in Ireland. He is there to chart the course of Conor who is recovering from a massive stroke which has radically changed his personality. Over the course of two months Forte's Ted becomes part of the family and changes them.

Brilliant performances and charming moments gets lost in a script that loses it's way in the final third. There is a moment just after` the swim meet that things suddenly stop making sense. Watching the film I felt as if someone had dropped a reel. Something was missing as the film lurched from thing to thing. How did we get here? I didn't know.

Actually that the film doesn't make a whole hell of a lot of sense in that the film doesn't really treat  most of it's characters as anything other than constructs. The Casey daughter likes to dress up as animals. That's her character. Their son is gay (something Conor is unhappy with). That's all there is to him.  Conor's father wants him to man up and get better and cut his son some slack (that's his character). No one is particularly well drawn and any presence they have comes from the actors abilities.

What is here should have been a kick ass film, lord knows the actors are up to it, but more than once one gets a sense that something was cut out. For example why does Ted leave the hospital when Valentia arrives? There seems to be something missing. Actually from that point on things happen and there is a sense that we missed a scene or two previously. Either Steph Green the writer director was too long making shorts or he was too close to the material and didn't realize how it would play for people not as close to the characters and story (the script has been kicking around since 2009)

Do I recommend the film? kind of if you can see it say on Netflix or cable. The sequences that are here are good even if they aren't adequately joined together. Also the cast is across the board excellent. Outside of that you're on your own.
Posted by Steve Kopian at April 29, 2013