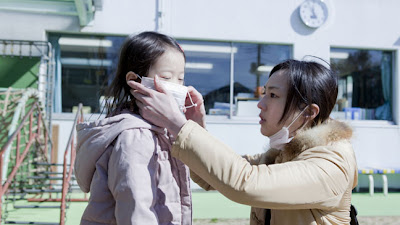 Split personality film will play differently depending upon your closeness to the subject, the aftermath of the earthquake and tsunami on 3/11 two years ago.

The plot of the film follows two women  who live next to each other in an apartment complex in the days after the earthquake.  As the physical damage appears small the pair try to cope with changing government stories and the threat of radiation.One woman tries to keep her daughter safe at day care (the ground may be contaminated), while the other tries to get her husband to move away from the danger.

To my Western eyes this is a good film that could have been great had it taken a singular track all the way through.

Most of the the first half of the film is a polemic as everyone talks about the radiation and how one should wear masks and try to see if things are really safe. It's similar conversations over and over again for almost an hour. The second half we finally get characters as we see the riffs between husband and wives, and how the men are not really there for their women. Yes it's soapy with talk of miscarriage, divorce and suicide, but at least it has characters are not mouth pieces. Hell we even get to understand the Japanese psyche about carrying on as if nothing is wrong. This is what the film should have been.

I did like the film, but I didn't love it. Its almost great. Worth seeing,especially if you haven't seen any of the films on the disaster that have been coming out of Japan.
Posted by Steve Kopian at April 25, 2013