Live action version of the long running manga and anime series largely nails things down as far as I'm concerned and has become one of favorite films of 2013.

Theplot which follows and or borrows parts of the first two story arcs in the manga and anime (but beautifully streamlined into a story that actually works and doesn't feel choppy) follows the wandering samuai Himura Kenshin, once called the mankiller because of his skills with the sword.  In 1868 the wars end and Kenshin, weary of the killing, drops his sword and walks off. Ten years later he ends up making the aquaintence of Kaoru Kamiya, the daughter of a great sword master who's reputation has fallen into disfavor. She is patroling her neighborhood looking for the legendary makiller who is commiting murders. Kenshin is not the killer, rather it's man in the employ of an opium dealer using the name to cover his crimes. As kenshin falls in with the young lady his past comes caling and he is forced to put his vow not tokill to the test.

I ama huge fan of the anime having seen most of the run of the show. I am less a fan of the manga simply because I came late to it and didn't read all that much. When I saw that they were doing a live actionversion I was apprehensive. I was sure they were going to botch this...

...and then the movie started and Kenshin apeared and I knew from the moment he gave up killing they had, in my opinion, nailed it. This was going to be everything I hoped it would be, a mix of action comedy and romance. It was going to be a film filled with all of the familiar characters, who they seemed to get right, even if they are only on screen fleetingly.

What can I say the film genuinely moved me.

I know most of you don't really care for the romance, but trust me it's a kick ass romance especially with a late in the game moment that tests Kenshin's resolve not to kill.

I do know that most of you will care about the action sequences, and they are incredible. Kenshin moves, rightly, like no one else as do his foes and it makes for a brilliant series of battles. Equally wonderful is Kenshin's allie brawler Sanosuke Sagara, a big man with a big sword thats twice his size (an aside swords like that really were used and aren't as cartoony as you might think). Sonosuke is involved in a wonderful fight in a kitchen that is probably the non Kenshin highlight of the film.

Whatcan I really say about this film other than I loved it. I thought it was great. My hope is that it will get a US theatrical or film festival release so I'll have a shot at seeing it on the big screen.

Yea this is one my favorite films I've seen in 2013 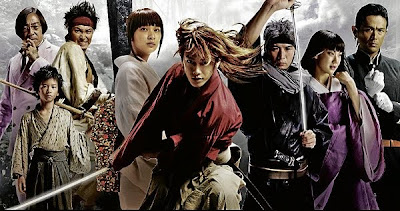