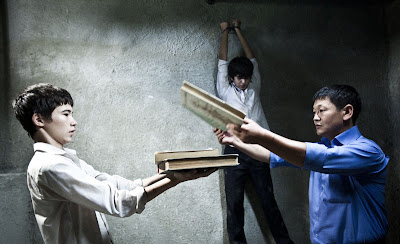 Deliberately constructed film looks at the dangers of growing up in an abusive socciety. In many ways it's  too artfully constructed to work completely.

This is the story of teenager Aslan, a slighty withdrawn young man who has been singled out by one of the school's mafiosos. When Aslan makes a friend from the city, things escalate and the bully dies, Aslan is brought in for questioning and tortured...

Strange film that is takes a dim view of life which it sees as hierarchical levels of abuse. It doesn't matter who you are someone is going to rain shit on you. Its brutal and violent (though strangely much happens off screen despite some graphic nastiness) film that Mondocurry compared, rightly, to the Korean film King of Pigs.

I'm not sure what I think of the film. It doesn't help that Aslan says almost nothing during most of the film. He's simply abused. The long static shots of carefully composed images suggest that the director is trying to say something meaningful, but weird turns such as a water walking sheep keep me from taking the film as anything remotely serious.

One of the most troubling things is that while the press notes indicate that the film is supposed to be how Aslan sees the world there are much too many sequences that he could never have known about.

Some people loved the film, I was annoyed that I was forced to dwell in the darkness of life for no adequetely explained reason.