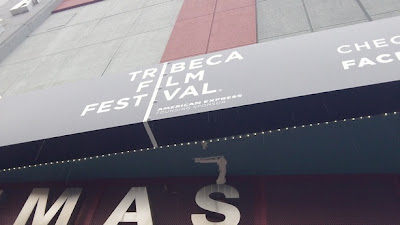 I'm physically at the wall. I haven't hit it, but my nose is touching it.  This is the result of working a day job, going to the pre-festival films for three weeks, writing and then trying to coordinate all of the Unseen writers to cover the festival. For the first time in doing Unseen I've truly found my physical limitations.

Because it was clear even when the festival started I was approaching the wall I stepped away from the Subway Cinema Old School Kung Fu festival that is running this weekend. It was also the reason that I didn't fill in the hole that seeing Elaine Stritch last night left in my schedule for today. I stayed in and slept late- a whole hour.

The schedule today was a short one. I only saw two movies...well one and a piece...

FARAH GOES BANG opens with one of the most painful seductions ever put on film. Farah is on a couch when her boy friend puts the moves on her. She ends up rebuffing him because she's a virgin and is unsure about how to end the situation. The film then shifts as Farah and two of her friends go on the road to help John Kerry try and win the 2004 election. Allegedly a comedy, the half hour I saw wasn't very funny. It suffered from writing that strained to be sub-sitcom in it's sex talk. Does anyone talk like this? I don't think so. Worse the two women traveling with Farah make no sense. Who are they and why are they friends with Farah? The friendship doesn't make any sense. Actually none of the film makes sense and after half hour I bailed. (I won't go into the anachronisms because I feel bad picking on the film)

MR JONES is a found footage film concerning a couple who move out to the country to shoot a documentary over the course of a year. almost two months in the couple discover they are living near mythic artist known as Mr Jones. No one knows who he is, they only know his weird totems which he will occasionally send to random people. While the wife films the art in the landscape the husband flies to New York to talk to people who know of Jones's work. It soon transpires that there is something even weirder than they thought possible was going on.

This is a film that is completely derailed by the found footage nature of the telling. The problem is how the film is shot makes no sense. Much of the film is shot using a weird rig that shots the cinematographer at the same time as the subject. Why anyone would shoot a nature documentary is a question that everyone was asking after the film, even several filmmakers who were taking in the lobby after the screening.  Other found footage related questions such as why do they film themselves sleeping? And why is the conceit of found footage abandoned in the final twenty minutes? They are questions that I don't have answers for and kept me from really liking  the film the way I should....

...and I should have loved this film because the story is great, the performances are there, and when the film works (which it does in fits and starts) its great.  Trust me had this been a straight forward film, or one that used the found footage mode sparingly this would have been one of the best films of the year. Sadly the film misses the mark.

After the film I wandered down to the press lounge with Hubert and then I headed home...

And while normally I would say I'm off to bed- as I write this it's not even 9PM which means I'm going to try and write up the 9 films I want to do in full reviews.

Keep reading because many reviews are coming.
Posted by Steve Kopian at April 21, 2013