WIll You Still Love Me Tomorrow? Tribeca 2013 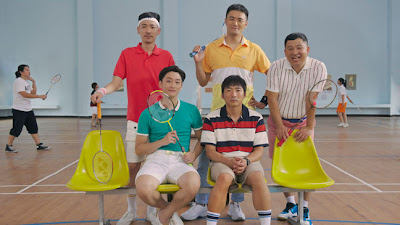 Please bear with me as I mangle an explanation of the plot...Weichung runs into one of his old boyfriends at a function and is kidded that he is now a married man with a child. This sets Weichung questioning his married and straight life style just as Thomas walks into his shop making him question things further. Meanwhile his sister is getting cold feet concerning her own marriage and his wife is having trouble at work.

Charming feel good film had me laughing out loud from start to finish even as it brought tears to my eyes. Even with it's occasion shifts into fantasy (one character flies away on an umbrella, Weichung literally walks on air after meeting Thomas, a karaoke session turns into musical number, Weichung's sister talks to a soap opera actor who appears on her couch) this film is still firmly rooted to reality and real people. We know people like this and we can recognize ourselves in bits of this.

This is a super super film.

One of the things I like is that the film doesn't over do the gay angle of the story. Yes it's important, but at the same time it's treated as if it's no big deal. If you restructured the film to be all heterosexual characters the film would still work because the film isn't about being gay or straight but about finding love and a soul mate.

I really like the film and my only real complaint with the film is that as the film heads past the one hour mark the film loses sight of some of it's characters. Stephen and his gay friends disappear as does  Weichung's sister. Yes they come back, but their absence through much of the last 40 minutes is felt.

Slight reservations aside this is a film to see either at Tribeca or whenever you can track down a copy (I want to get this on DVD). Frankly I think this could become one of your sleeper favorites.
Posted by Steve Kopian at April 23, 2013