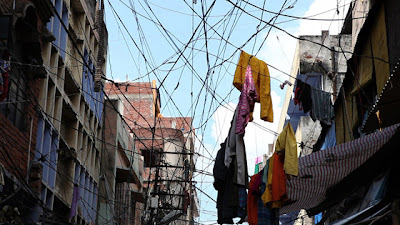 I honestly don't know what to make of this film. Easily one of the most cinematic of any film I've seen at Tribeca to this point (this was the 26th film)   I'm not sure if it adds up to much beyond an interesting ride.

This is the story of the people living in Kanpur India. Once a thriving industrial city, now the city is plagued by blackouts and pollution(the result of the use of generators). Many people are so poor they can't afford to pay for power so they pay people like Laoh to make illegal connections into the power grid. As the power company tries to disconnect the illegal hook ups and get paid for services, the system itself if taxed past the point of breaking.

A mix of documentary and staged footage, there are times when it isn't clear if what we are watching is real or made up. I suspect that much of the film is true to life but there are still numerous times where you can't be sure if it's real or not.  The result is a film unlike any other I've run across (most films either blend things seamlessly or make things clear where the lines are).

While certainly not a bad film,  it still manages to confound me. Through much of the film I was asking What am I looking at and why do I feel like I'm only getting part of the story? In a weird way this isn'ts so much a documentary as an essay with the scenes of Loah with his mother or drinking with friends taking   the film into places that are unexpected.  The result is I don't know what I'm supposed to get out of the film. Whats the point of it all?

I do know that there is something about the mixture that is kind of intoxicating since you never know where you're going to end up or what the film is going to pull out of it's bag, be it a song or an interview or a staged discussion. You can't help but watch simply because you get the sense that anything can and will happen. On that visceral level this film works like gangbusters, however on the intellectual level I just wish the film was clearer in what it was trying to say- which seems to be that its siding with everyone against everyone.

Definitely worth seeing for the adventurous film goer.
Posted by Steve Kopian at April 24, 2013