Tribeca Day 8- Light at the end of the tunnel RICHARD PRYOR:OMIT THE LOGIC, RAZE, KISS THE WATER, A SINGLE SHOT 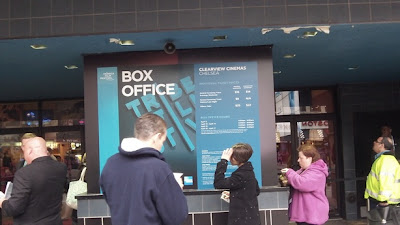 I know the numbers for Unseen have doubled and more for Tribeca, and apparently you all really are reading us because today I had several people go "So you're Unseen Films, I've been reading your coverage." At a time when I've been wondering about the blog, it was a wake up call that apparently me and the rest of the crew are doing something right. Thank you. (And please keep reading when the festival coverage since we'll still be reviewing films long after the festival is done)

I need to make another shout out to Nina and the other volunteers. Thanks for the discussion. You keep recommending good movies and best of all providing fantastic insight into the films that I frequently didn't catch on my own. Thank you.(And no I will not behave- and neither should you good sir)

Outside of  the talk today had me viewing four films.

RICHARD PRYOR OMIT THE LOGIC is a Showtime produced documentary about the actor and comedian. A look at his life and career the film is a wonderful reminder of what was lost when he passed away. Is it a great film? No, the telling is a bit awkward, with his private life not really being mentioned until about half way in, which makes things seem a tad untethered and kind of empty. Don't get me wrong the film is touching, moving and damn funny, it's just not the great one that I was hoping for. Worth seeing when Showtime runs it in the near future.

RAZE.
Oh boy.
Misogynistic action film has kidnapped women fighting to the death. Not a lick of it makes sense even internally. You've seen variations on the theme any number of times before all of which better. All I could think was that Roger Corman would have made a kick ass version of this. I'm going to write a full review when I'm done with this report (it goes up at noon). In its favor I want to say Zoe Bell is amazing and with luck she'll become a huge star.

KISS THE WATER is a beautiful film with truly amazing and magical animated sequences. The film is nominally the story of fly fishing and fly tying in Scotland, but I'll be damned at what it's getting at. The film starts somewhere in the middle talking about a Megan Boyd who tied flies and goes from there with no context- at least in the first half. In all honesty I walked out when I realized I had no clue as to what I was watching.

A SINGLE SHOT concerns a character played by Sam Rockwell who accidentally kills a girl while out poaching. When he tries to hide the body (he has troubles he doesn't want to add to) he finds a stash of money which he steals. Flashing the cash the bad guys know he has the money and it sets in motion a battle for survival.

After conversing with Matthew from Paracinema via Twitter I realized that the reason I didn't like the film is that it is similar to Sam Raimi's A SIMPLE PLAN. That film, like this was based on a novel that no doubt played better on the page. For me the real problem is that Rockwell's lead character is too much of a bonehead. I found it hard to believe that he pigheadedly forces his way through even when it's clear the bad guys are onto him. It's a great performance but I don't like watching idiots.

Some people loved it, I'm meh about it.

For now that's it. I have another piece or two to write tonight before I run off tomorrow for the last day of press screenings.
Posted by Steve Kopian at April 26, 2013