Tribeca 2013 Day 5 MC CONKEY, BIRDERS GUIDE TO EVERYTHING and THE PROJECT or It's Monday and no one is around 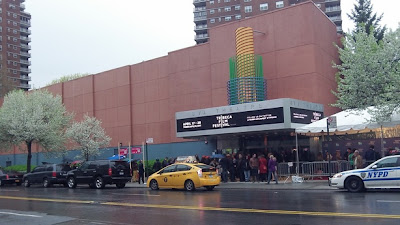 Monday morning press screenings at Tribeca are frequently deserted affairs or seem to be until the film starts. I watched a PR person begin to melt down because there was almost no one in the theater. One of the volunteers assured her it was not the film but the day of the week. The first weekend is so crazy many people straggle in late on Monday if at all. There is also a heavy rotation of interviews going on that many people are just not watching movies. By the time the movie started the theater filled, but if I hadn't done this before I would have sworn Tribeca shifted dimensions.

I saw three films today. They are not getting fuller reviews than they are here (well The Project might) because I don't have much to say beyond what I'm saying here.

McCONKEY is about skier and base jumper Shane McConkey. Shane was never good any much other than being a the life of the party,skiing and jumping off things, at least as far as the film tells it. He died in 2009 when his equipment malfunctioned. The film alternates talking heads and video of McConkey through out his life with footage of the trip that ended up taking his life.

How you react to the film will depend on two things, do you like ski films and footage of people base jumping? You will also have to consider what you think of McConkey. I thought he was an asshole for most of the film and it made the film a tough slog. Yes, what he did was amazing, but why the hell should I care about him or what he did? The film never explains it and so it fails to become something beyond a core audience will relate to. Yes the visuals are amazing and what McConkey did will blow your mind but the man at the center is one dimensional.

I blame the director and editors who ultimately tell the story badly since until the last 20 minutes of the film no mention is ever made at how often McConkey got hurt. As far as much of the film is concerned he's superman-until he's not. Hell until 70 minutes in when a friend of his dies there is no sense of danger at all.  Without the weight the film fails to impress and by the time it comes it's too little too late.

I suspect that there is a good story here but it will take someone who isn't in love with the subject to tell it.

THE BIRDERS GUIDE TO EVERYTHING  is a been there and done that story of a kid mourning his mom upset that his dad is remarrying so soon after her passing. When he spots what he thinks is an extinct duck he and his friends go off to track it down on the day before his dad's wedding. A good film on it's own terms it suffers when you consider how many times we've seen a variation of the story. Despite the couple of big names like Ben Kingsley (they are glorified cameos), the film has nothing special to keep it from getting lost in the forest of similar films.

THE PROJECT is the story of Puntland Maritime Police Force which was set up in the Puntland region of Somalia to combat the pirates who are seizing ships and holding hostages. Funded by the United Arab Emirates and run by the infamous Blackwater corporation using mercenaries as instructors the forcewas set up to take the battle to the bad guys. However things get complicated when traitors in their midst and pressure from the UN come to bear.

An intriguing film about a bunch of people trying to do the right thing and running into problems all around. I like that we get to here voices both pro and con regarding the force (technically the force shouldn't exist because of a weapons embargo against the nation).  Are they doing a good thing or bad thing? Will the force be good or bad? We don't know, but its clear someone has to do something.

The film has a killer start where the situation is laid out and we watch as the force is formed and trained. Things slow down for a bit as we watch them chase after shadows (there are people loyal to the pirates in the force who are warning them) only to pick up as frustration (or not) leads to a mutiny. the final half hour is extremely tense.

I really liked the film a great deal. My only wish is that some of the blind running had been cut down, but other than that its a tense and thought provoking film.


That's it for today. Tomorrow three or four films plus I'm doing an interview...
Posted by Steve Kopian at April 23, 2013