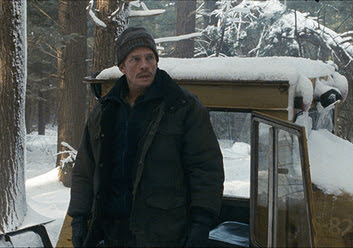 This film blindsided me into loving it with the result it's on the short list of films that are must sees at Tribeca. This is an absurdist take on film noir and its both gripping and damn funny.

The film starts with Thomas Hayden Church running over a a man wandering down a road in a snow storm. He then dumps the body over an embankment and then buries it in snow before fleeing into the night... and into the woods. I will not tell you any more since what transpires over the next 90 minutes is really really funny in all the right ways. I will say that no deed goes unpunished.

That the film works at all is due in large part to Hayden Church himself. He's on screen the entire time and he holds your attention as if he's gripping you by the throat. Its a performance that should win lots of awards since it's one of  roles that makes you wonder how the hell he's doing it. I love that  your feeling for his character, Bruce, bounces all over the place. You like him, you hate him, you pity him, you wonder how he got this stupid, you know why he did what he did. If he wasn't already a star he'd be one after this role.

When the screening ended everyone in the row all turned to each other and marveled at what we saw. It was not what we expected and it was way better than anyone could have hoped. I think most of the people were only there to assure themselves a seat for the film that followed...which ended up disappointing and paling in comparison. When the following film ended all anyone could say was how good Whitewash was.

This is a treasure and a keeper. This is one of the best of Tribeca and one of those films you'll want to see sooner than later so you can brag to your friends that you already saw it when they come to tell you about it.
Posted by Steve Kopian at April 20, 2013