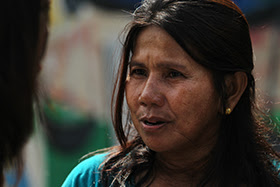 Food for thought and then some...

This is the story of the illegal organ trade. This is the story, or stories of the poor of the world who literally sell part of themselves for some quick cash (perhaps the equivalent of several years salary all for a kidney or some other organ) and the people who buy them or facilitate the transfer.

I honestly have no idea where to begin.The film starts in the Philippines where there is a booming business in Organ sales. Its illegal of course, unless you give the organ away you can't dispose of any of your body parts, but people do it with regularity.  Here the film follows a couple of perspective donors (one of which who just wants to get a home and not a crawl space to live in) and a broker who has helped several people sell their organs including many in her family.

We follow several people in need in the US and Canada, and what they have to go through by playing by the rules.

We also get to see the story of a Canadian man who had a transplant on the black market and is nor embroiled in the middle of legal proceedings against the people who helped him. (We also meet the doctors and prosecutors in the case).

A solid little documentary that for the most part lays out the situation concerning waiting for an organ and the moral stance that prevents people from selling theirs to people in need.  Actually the film spends a great deal of time with the ridiculous double standard of you can give someone an organ but you can't sell one and shows us where that all leads (The death of 118 people during the running time of the film)

For the most part the film is not  a be all and end all documentary on the subject it is arguing in favor of some sort of regulation  by laying out the facts and tells the stories, iincluding one family where a mother and her kids are all on dialysis for years (we see the result of 20 years on the machines) and lets you sort things out...

The minor problem with the film is that it isn't scrupulously fair minded since it's arguing that we should allow sales, with the negative side of organ sales are not really dealt with. We get one story of one donor who's remaining kidney is failing and found out that they have have had kidney disease for years, meaning the person who got their kidney got a bad one. The point being that had the testing  been better this would never have happened (other problems are either glossed over or reduced to hearsay). The film also never deals with what might happen if sales were allowed other than lives would be saved.

One sidedness aside the film is actually extremely thought provoking, so much so that I was almost an hour in before I realized that they weren't really dealing with the negative and it didn't bother me. There is simply too much material to digest just to begin to discuss the subject that it's understandable if things aren't completely covered. Actually there is so much here to take in that I can't wait to see it again when it shows up on HBO (since they financed it).

A must see film about a serious moral issue.
Posted by Steve Kopian at April 30, 2013