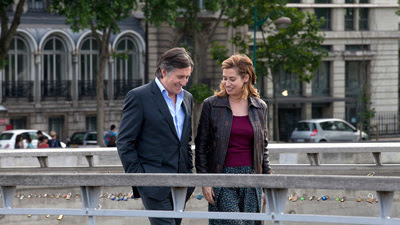 Alix, the main character in Just a Sigh, is my vote for the psycho of the Tribeca Film Festival. Sure she doesn't kill anyone or do anything truly evil, but she does chase down Gabriel Byrne's Douglas with a skill and style that is really way too creepy for a drama/romance.

The plot of the film has Alix leave Calais where she is appearing in a play and return to Paris for an audition. She also hopes to talk to her boyfriend about something important. Boarding the train she sees Gabriel Byrne down the aisle from her. They make eye contact, and they almost connect when Byrne asks directions. She then goes to the audition and unable to get in touch with her boyfriend she head out after Byrne where she finds him at a funeral. The film goes from there as the pair orbit and then crash into each other.

Filled with silences and meaningful glances this is a film that is desperate need of an editor and a rewrite. Don't get me wrong the film has two good performances but there is little on screen to make it a whole movie. There are bits here not an entire film.

First and foremost the film needs an editor. One could, assuming one was a competent editor, chop the opening 25 minutes down to five or ten. Much of the time is of nothing much happening, with the pair making eyes at each other on the train and not saying anything. Do I really need to watch Alix sleep? You might, I don't. There are several other sequences in need of chopping as well (anything where the characters wander around not saying anything).

From there we watch as Alix has a series of encounters that are good unto themselves but belong in a more connected movie.The entire sequence with her sister exists partly because it's good and partly to fill in Alix's back story which we'd never see otherwise.

And Alix is a psycho. Yes we come to kind of understand why, but at the same time we don't. Alix simply goes crazy. Want proof, watch the way she constantly, way more than any rational person would, continues to go to the ATMs to get money that isn't there. She charges things but is always declined (This is a piss poor contrivance). What is she stupid? Why did she only take 5 Euros from home?

Then there is the whole circling Gabriel Byrne. She stalks him in a manner that is really creepy. Most people would back off when they saw he was at a funeral, but no she dives in again and again. I'm not denying the sparks, I'm only saying the behavior is nutty.

One of the factors obviously affecting her is her boyfriend We don't get to know her boyfriend at all except in a cryptic call at the beginning and a later one which sets the ending in motion. Who is he and why is she having the doubts she has? We don't know enough. Aside from the final shot on the train it seems like all she needed was to talk to him...which makes me wonder what of Byrne's character since the envelope foreshadows much more to the story.

I honestly don't know what the tone of the film is and what the director is getting at. Some of the film is very funny, but other things are not. There is a bunch of this that could be funny or not depending on how you want to take it. Is it sad or happy? What is it?

I'm not sure the director/writer knows. If you watch the film and listen to the dialog pretty much everyone has a name, except that the end credits list all of the characters out side of Alix as things other than their names. Gabriel Byrne's character is I believe the man when his name is given as Douglas. There are a couple of times in the film where Douglas (I should call him by name even if the director doesn't) and Alix talk to each other but we don't hear what they say, this is more than when he whispers into her ear as they cross a street, there's other times, and it's almost as if the idea is that words mean nothing, looks do (There is the line about being able to read eyes).  The problem is that with out the words there is little for us to go on. I really have the feeling that the director had certain ideas he wants to get across and he's constructed a series of scenes and created a couple of characters to get the ideas across. the problem is that he doesn't care enough to have made a film that connects up all of the pieces.

Great performances aside this is a movie to miss.
Posted by Steve Kopian at April 19, 2013