Hiroshi Abe needs to come to the US and do a detective show,actually I'd love to see him take the Kaga character he plays here and bring him to America, or at least into a series.

Based on a novel by Keigo Higashino (in one place it said that it's the 9th in a series) the film follows Detective Kaga as investigates the death of a man who's body is found under the statue of a kirin. Actually the man had been stabbed some distance away and then staggered to the place where his body was found for some unknown reason. Things look open and shut when a man is discovered near the murder scene, but he ends up being struck by a truck and is in a coma, so the police can't be sure. Of course things are never that simple.

Very good mystery is completely the sort of film that will probably not get a regular US release since it's not wild and crazy or genre. Its simply a solid mystery about some interconnected people. It's also a film that in the final couple of moments had me getting a bit misty.
To be honest the mystery isn't all that spectacular. Its a tad convoluted and I'm not completely sure it makes sense, but at the same time it does allow several wonderful characters to wander about and through the film.

Foremost is Hiroshi Abe's detective Kaga. A man of quiet strength, he strides through the film. Kaga seems to be able to talk to anyone and get them to talk. It may take him a few tries but people seem to open up to him. At the same time he refuses to talk about himself. There aren't issues with his father but volumes, and it's clear that the relationship of the dead man with his son rattles him.

The other characters are equally compelling, the psychologist/nurse who attended (I think that's right) Kaga's father keeps appearing to ask him why he left his father alone is the sort of presence who keeps Kaga off balance. Kaga's partner, a younger detective, clearly looks up to the older detective, but at the same time its clear why he is where he is. The suspects and other characters are well drawn and help to keep you guessing as to what really happened.

What I liked as well is the sense of redemption and doing the right thing. There is a vein of philosophy running through the film that is missing from most other mysteries. Its a touch that nice deepens everything that is happening.

I really liked the film a great deal. It may not be the best mystery ever, but it is one that had me talking about it for days after I saw it with my DVD of the film getting loaned out more than a couple of times. 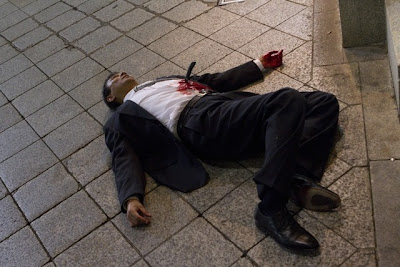