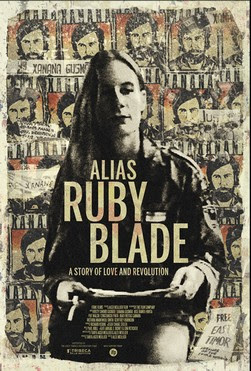 The poster promises a different film than the one we get. There is something wonderfully subversive about the poster that is missing from the film itself.

This is the story of Kirsty Sword Gusmao who grew up in Australia in the 1970's and 80's and then through circumstances found herself first acting as a journalist covering the Indonesian oppression of East Timor before becoming an important part of the resistence (Ruby Blade is her code name) and eventually falling in love and marrying Kay Rala Xanana Gusmao the head of the resistance and the eventual Prime Minister of the country.

Good but way too loving portrait of the woman and her  role in the fight to free a nation. This is the story of a woman who went in and helped win freedom, and looked good doing it. (actually she comes across as a kind of political groupie). I find it very strange that at no point does anyone, anywhere, question this "outsider's" help. Kirsty by all accounts is accepted by everyone without any question. Its not that there is anything  wrong with her story or how it's told, except that it's more than a little bloodless. Kirsty never seems to be in much danger and it seems to be almost skittles and beer even as the people of East Timor suffer. Hell even being in prison seems to be fun for her future husband. (I will say this, the scenes of the pair falling in love is a great deal of fun.)

For me this is a good film but not a great one.  As I said is the film seems to be rather bloodless. . We never get a sense of the cost, real or possible for her, The tensest moments come when after the vote for independence goes against Indonesia and the militias begin to head toward the UN compound. Here at last is a sense of danger and cost that is missing from the rest of the film. Kirsty is of course somewhere else when it's all happening but at last we get a sense of the cost of the fighting for at least the people she's helping.

The other problem with the film is there is very little context. The whole invasion and take over the country by Indonesia is reduced to a series of sound bites. Kirsty's pre-revolutionary life is covered in less than a minute and any sense of her outside of the cause is completely missing.We also never get any real sense of why the people of East Timor feared the Indonesians other than they were invaders. We don't know how bad things really were (and they were in spades.)

This is an okay film that is little more than a love letter to it's subject and a superficial primer on the larger subject of East Timor and Indonesian misdeeds.
Posted by Steve Kopian at April 18, 2013