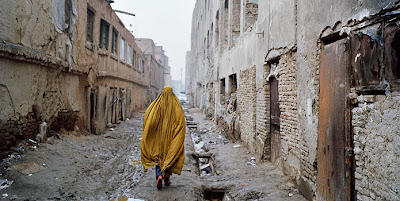 A woman in 30's tends to her catatonic husband. He has been shot in the neck (during a fight over an insult to his mother) and reduced to a barely living state; As she tries to tend to him her neighborhood finds itself on the front line of sectarian violence. Sitting alone with her husband she begins to tell him all of her life and her secrets as if she were the mythic Patience Stone which will absorb the plight of the person speaking to it and then shatter releasing them.

I suspect that the only reason that Golshifteh Farahani didn't get an Oscar nomination for best actress this year at the Oscars was that no one saw this film (It was the Afghanistan Oscar selection). This is one of those roles that actresses would kill to get since the role allows one to really show ones chops and run the gamut of emotions. Its the sort of powerhouse role from which legends are made.

Essentially a monologue, the film could easily be a theater piece. While little physically happens there is much brewing on the emotional level as our heroine goes from a closed bud to open flower as she reveals her physical and emotional self to a man she barely knows.

You will forgive me for not really going into more detail  but  the film is very difficult to explain if you haven't seen it. If I told you everything that happened you wouldn't think very much of it, on the other hand if you watch the story unfold and be told with a detail that my meager words can not convey, then you will end up moved and enlightened.

To be honest outside of the performance by Golshifteh Farahani I like the film more than I love it.Some of it seems a bit too soapy. On the other hand by the time it ended I was engaged enough to be moved by the conclusion...and wonder where things would go next

Definitely worth trying.
Posted by Steve Kopian at April 27, 2013