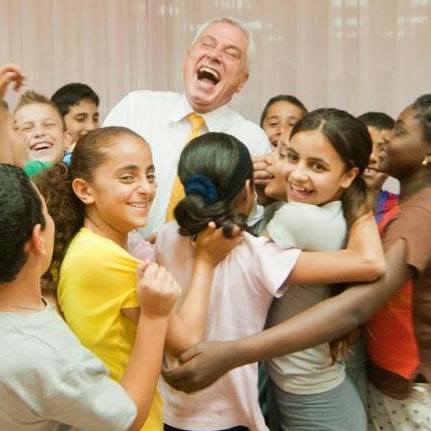 Pierre Dulaine (pictured right, with children from the movie) is about as unlikely a facilitator to Mideast peace as you've ever seen: a silver-haired, impeccably besuited man, son of a Palestinian mother and an Irish faith. He's an international award-winning ballroom dancing champion and dancing teacher, famed for introducing ballroom dancing lessons to New York City's public schools (a fictionalized version of Dulaine was played by Antonio Banderas in the movie Take the Lead). He was born in 1944 in Jaffa, the oldest section of Tel Aviv, Israel, and left the city in 1948 with his family. He hasn't been back until the events of this documentary, where he undergoes perhaps his most challenging task: attempting to bring the Palestinian-Israeli and Jewish children of Jaffa together through the art of ballroom dancing.

This straightforward but colorful film contrasts Dulaine's return to his hometown with the journey of discovery (of self and their natural neighbors) by the children. Substitute any other social, racial, or faith-related dispute around the world for the rift between Jews and Palestinians: Dulaine's task to bring together the children of these natural religious and political enemies only highlights the universal nature of kids: children are children all over the world, and these kids are delightful, funny, and real, especially stand-out Noor, with a mixed religious heritage and explosive anger issues. Dulaine is funny, lively and energetic on the screen, but the real stars are the kids, who vibrantly sum the ground-level view of Jaffa kids. 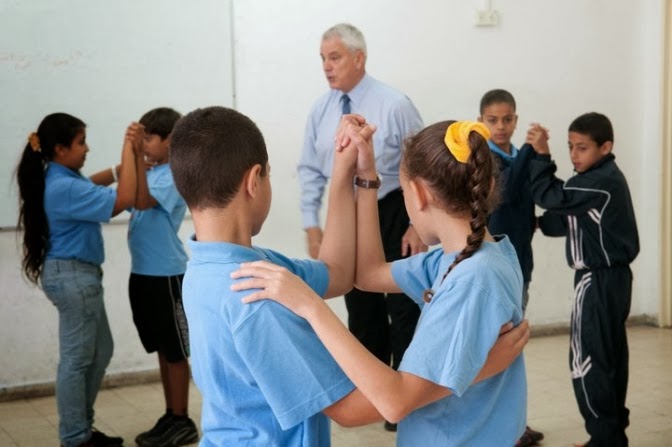 Against the background of the modern day Jewish/Palestinian struggle, their frustration and disappointments are immediate, without filter, as they slowly, and sometimes reluctantly, learn to "dance with the enemy." Their concerns range from those natural to their age: they can't adequately articulate their reluctance to dance, to deal not only with the rift between political/religious factions but with the more natural, and much older gap, between young boys and girls. At their lessons the children eye each other suspiciously and warily, and go to enormous lengths to avoid touching each other. They're are also very aware of the cultural differences: "If my dad sees me with an Arab he'll kill me," one girl comments. 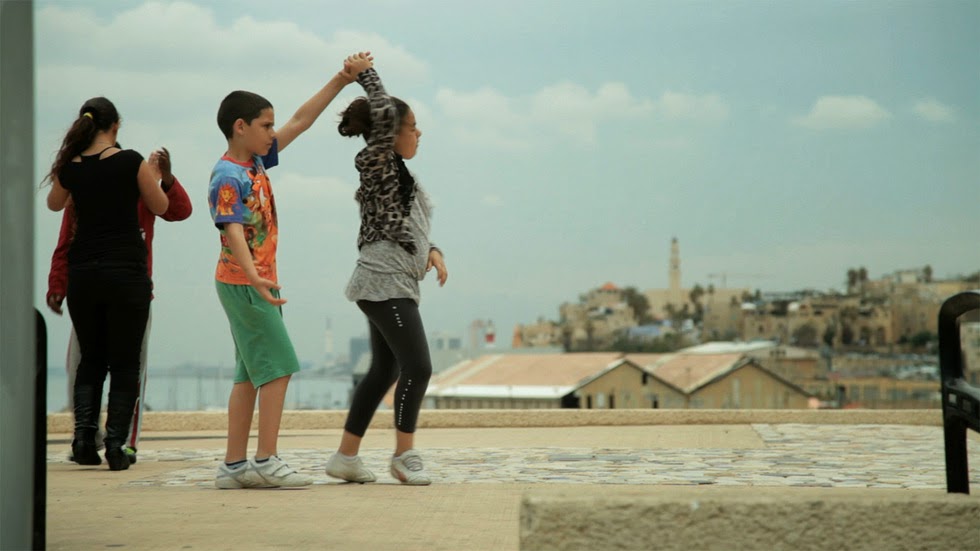 It's not surprising that the personalities of the kids take over the movie, especially during a section when Dulaine is away from Jaffa. Youth takes center stage in a effervescent montage of practice for their dance recital, and they speak on camera, first shyly but then honestly and openly, of their understanding that neither side (nor sex) is going away. "You don't have to marry everyone you dance with!" Dulaine teaches them, and with discipline and humor as the seed of working together for the next generation as slowly the kids begin to lean to trust, the basis not only of adult life but also of ballroom dancing itself.

A simple, ground-roots production (partially funded through Kickstarter), Dancing in Jaffa has no real surprise or hidden agendas, no real twists, turns or shocks, but succeeds on the basis of its street-view lens on Jaffa and its population, the effervescent, sometimes impatient intensity of Pierre Dulaine, and fantastic work both on and off the dance floor by the kids. Dancing in Jaffa is pretty much what it says on the box, but that label in itself is extraordinary: teaching the kids of a tension-wracked city to trust one another.

For details on Dancing in Jaffa at the 2013 Tribeca Film Festival, visit the festival website.