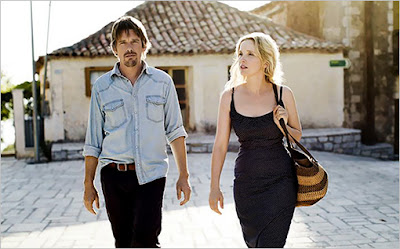 Third film in Richard Linklater's before series is one of the early joys of this year's Tribeca Film Festival.  Screened to a packed house of critics it resulted in a smattering of applause when it was done. I would have applauded myself had I not been trying to stifle a  bad cold.

The film picks up Celine and Jesse (Julie Delpy and Ethan Hawke) 9 years after the last film. They are now a long together couple on holiday in Greece. Jesse has just sent his son back home to America and he's worried that he's not there enough for the boy. This sends quiet shock waves through his relationship with Celine, with whom he now has lovely twin daughters. As the day plays out there is much conversation as they try to make sense of life and each other.

The talk after the film was first how good the film is, and it is wonderful, and secondly how will the film play if you haven't seen the first two films. Not having seen either of the first two films completely I can still say its a gem and then some. Actually the film, is for the most part dead nuts on since I had a variation of some of the conversations myself. The film is quite simply one of the best and most on target films about relationships you're likely to find. Its so nice to see characters act like real people.

I loved this film, and I know one of my fellow writers did too since he said the film now holds the top spot as the best film he's seen in 2013 so far. I'm not sure I would go that far, but I'm still mulling it over and I can see it having a place on my best of year list.

Go see this one either at Tribeca or when it hit theaters soon. You'll laugh you'll smile you'll have a good time.
Posted by Steve Kopian at April 17, 2013