Tribeca Day 4- SUNSHINE JR, I GOT SOMETHIN TO TELL YOU, TEENAGE and THE MACHINE 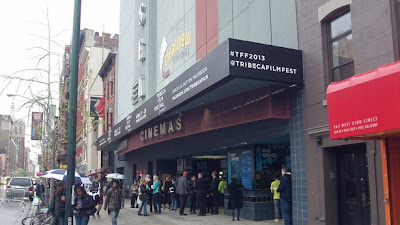 It was an early day at Tribeca with a 9am start.

I wish I could rave about the films today but I two of the films didn't thrill me, one disappointed me and one was a good throw back to the 1980's. Contrary to the previous three days films I'm not going to be writing up the films longer than the reviews here (well, The Machine may get one down the road- I need to see it again)

SUNSHINE JR started the day. The story of Naomi Watts and Matt Dillion as a down on their luck couple living in a hotel room trying to get by. He's in a wheelchair and she is working at the 711 like store that the film is named after. Well acted the film failed to generate much interest in me during it's first half and to be perfectly honest I walked out. It was simply taking forever to get anywhere...

I GOT SOMETHIN TO TELL YOU is Whoopi Goldberg's portrait of Jackie Moms Mabley. Moms was a legendary comedian that my mother loved deeply. She was a no nonsense story teller who made you laugh with her rye observations. Goldberg, who has performed Mabley's material on stage and was influenced by her, provides tons of examples of Mabley's work and delves into her influence, but deals little with her life outside of that. Sure much of her early life is hidden in myth and legend, but other parts of it isn't and it would have been nice to know something about it. I was kind of hoping that there was going to be more than just platitudes and some real meat. Its a good film but at the same time I understand why it's only about 70 minutes long (The festival material lists a 90 minute run time which is wrong) Worth seeing when it runs on HBO

TEENAGE is an essay on the history of teenagers and adolescence from 1904 until now. Filled with archival footage and some recreations the film has narration based on the writing of teens from the period. I'm going to politely remain neutral on this film since having been trained as a historian and having an interest in many of the related subjects I found it's take on it all slanted, cherry picked, and messy. I kind of  gave up all hope for the film when it show cased a swing kid in Nazi Germany as an example of what was going on. Its a good tale but not the main stream,. Couple it with a piece of narration bemoaning how mandatory enrollment in the Hitler Youth ruined it, and I was pretty much done (The feelings expressed could only have been written after the war). Some people liked the film a great deal, and if you don't look at as real history but as an essay it's fine, but for me it was a mess.

After TEENAGE I met John who was seeing his own set of films and went to lunch.

After lunch we went back to the darkness to see THE MACHINE, a science fiction tale from England.

Set in a future time when there is a cold war with China, the arms race is to make more intelligent machines and implants to help soldiers (or the main characters ill daughter). Hooking up with a young woman who's created a brilliant new computer our hero begins to take his work to the next level. This involves a robot warrior... where it goes from there is the film.

A very good science fiction film, the film manages for most of it's running time to weave a wonderful dystopian tale about robotics and what it means to be alive. To be certain it does cover ground we've covered before but at the same time it manages to keep it interesting.

The trouble occurs when the plot threads narrow down in the final half hour the film becomes less compelling  since we know the film isn't going to do something remarkable. The conclusion is satisfactory and perfect for a Sunday with a bowl of popcorn but it never quite reaches the greatness it aims for.

That said I really like the film and I can't wait to see it again, away from the horde of Tribeca films(it was film 45 for those keeping track). Honestly the only reason I'm not reviewing it fully now is I want to see it on it's own terms. Definitely worth seeing.

After that it was say good bye to John and Hubert, who came in for the final film, and head home. I'll be back it tomorrow with another 3 films...
Posted by Steve Kopian at April 22, 2013