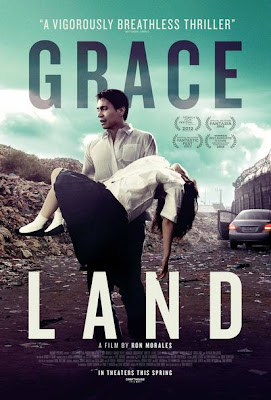 Last year at Tribeca Graceland played to shocked audiences. People left the theater shaking their head or talking to themselves. Some people walked out unable to deal with the darkness.  Yet despite the darkness it barely lost out the audience award for best narrative feature despite leading the polling for a good while.

I loved the film. I loved it so much that I emailed the PR people and told them that I would do anything that I could to help promote the film.

Now the film is out in theaters and you really need to see this film. Graceland  is a kick in the ass and a punch in the chest. Its the story of a kidnapping gone wrong, that gets worse than you can ever imagine. Its one of the most intense films ever.

Yea it is that good.

Want to know what I thought of it when I saw it at Tribeca? Here's a link to my review.
Posted by Steve Kopian at April 27, 2013

Email ThisBlogThis!Share to TwitterShare to FacebookShare to Pinterest
Labels: Graceland