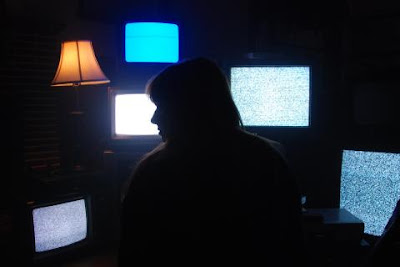 As I write this some three weeks before Tribeca I have not seen the first V/H/S film, so going into V/H/S2 I had no idea what I might have been getting myself into. Going in I simply knew vaguely what the film was supposed to be and I knew who one of the directors was, Gareth Evan's who did the neo-classic The Raid.

This is an anthology film that links together some video tapes that are found in the house of a young man who has gone missing. They are found by two detectives hired by the young man's mother who hasn't heard from him in a week. Finding a near empty house they find a computer, lots of TVs and lots of tapes. As one of the partners searches the rest of the house one watches some of the tapes- all of which have found footage of apocalyptic happenings.

Let me say this at the start as a found footage film, the whole project makes no internal sense, mostly owing to who would have edited most of the films. Its a small quibble but a minor one since I occasionally wondered who was filming the action.

I also need to say that the film is far funnier that scary with some wicked turns of phrase. This isn't to say that there aren't some chills, there are, but if you go, be prepared to laugh.

Personally as a whole I liked the film, but I didn't love it. For me it's a bunch of crazed short films, all of which that work to some degree, but it's no great shakes all together. Personally I think the problem is the length of of all of the films with Safe Haven (the Gareth Evans and Timo Tjahjanto  piece) probably too short, and Slumber Party Alien Abduction going on too long.

TAPE 49 the linking piece is good, but mostly its just there to connect the other pieces. The sting in it's tail has been done before and some of the attempts at chills don't work.

PHASE 1 CLINICAL TRIALS about an electronic eye prototype that has the nasty side effect of allowing you to see ghosts is amusing for much of it but it's ultimate bloody end  makes little sense.

A RIDE IN THE PARK has a bicyclist run smack dab into some zombies. A wicked send up of zombie films this film will have you roaring if you like George Romero movies or Walking Dead. This is one of the best films in the collection and damn funny.

SAFE HAVEN has a film crew visit a cult trying to open the gates of Paradise.  Bloody doesn't begin to describe it. It maybe one of the bloodiest films I've ever seen outside of a comedy. Its a wild ride that easily could have been turned into a feature of it's own. Its very good but it plays like a condensed version of one of the greatest horror films ever made.

SLUMBER PARTY ALIEN ABDUCTION has some kids and their friends encountering aliens bent on abducting them during a slumber party. Wickedly funny until the aliens show up, thiscould have been the comedy of the year. Unforunately once the aliens appear the confused nature of the dog cam and jumbled nature of the editing makes the film much less than it could have been. In it's way it's the weakest of the films.

As I said it's a good film that I think you'll remember more for the pieces than the film as a whole. Definitely worth seeing especially with rowdy friends at midnight.
Posted by Steve Kopian at April 16, 2013