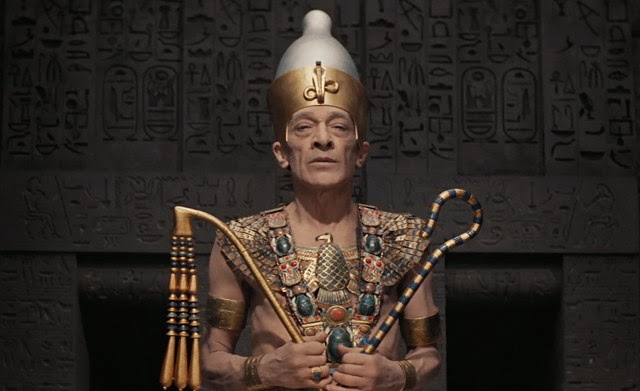 This is one of those films that makes you wonder how this film ended up off the radar at least as far as the US is concerned. This is a visually amazing film dealing with complex issues by great characters. Its a kick in the ass film that washes over you and makes you go WOW.

The film is the story of Ramses XIII in the days before his father dies on through his ascending the throne. We watch a he leads his troops on mock maneuvers and then begins to learn the way of governing. We also watch as he orbits around a young Jewish girl whom he found wandering in the desert.

This is an amazing film.

Visually the film seems to kick the asses of many of the American epics to the curb. Who would think that the expanse of the desert would be so compelling to look at. Equally compelling are the sets, many of which are actual locations. We don't get fancy shots of grand locations that are meant to show off movie magic, instead we get a sense of real places where people live and breath.  For the first time I had a sense of what it may have been like back two thousand years ago. To be certain the shots are almost too carefully composed to be fully natural but at the same time they have the feel of what a great photographer might have snapped during real events.

I love the complexity of the plotting. The film manages to be both a compelling story of a young man trying to make his way in the world before being thrust into being a leader, and carefully modulated discussion of the dynamics of leadership, what it takes to govern and the relationship between the weak and powerful. Yes the film is based on a novel but it feels as though the complexities of the book have managed to be transferred to the screen. Wonderfully the film doesn't feel dumbed down in anyway, even to the point that the opening war games sequence, which I've read doesn't appear in the book, beautifully sets up the discussion of the use of power by leaders. (The image of the hanged man haunts me still)

There is much to say about this film, but at the moment I'm not capable, nor willing. Seeing the film for the first time really knocked my socks off and the over riding reaction was simply to go WOW a great deal. I need to see the film again, and I need to see it BIG, which is why I' reserving any full review until after I see this film again on the big screen at Lincoln Center when it plays this weekend.

This is a film that truly can be considered a masterpiece. The first truly great film I've seen in 2014.

The film plays tomorrow and Sunday. Details and tickets can be found here. If you have any love of cinema  and want to see something that you haven't seen before and really need to see on a big screen this is the film. It will knock your socks off.
Posted by Steve Kopian at February 06, 2014