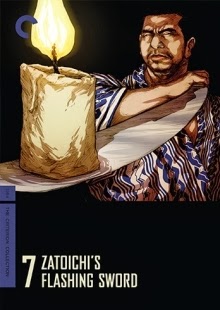 There's a special kind of cowardice to shooting a man in the back, particularly a blind man. Unless that man is Zatoichi. If you haven't watched any of the films in the series, the pre-credits sequence of Zatoichi's Flashing Sword shows why a gun may be the best weapon against the blind swordsman. Zatoichi is asleep, sweaty, and pestered by flies. The people in the room look on expectantly. Perhaps they're plotting to rob him like others have tried in the past, or perhaps Zatoichi's reputation has preceded him and everyone is just watching--like the audience of Zatoichi's Flashing Sword--wondering what he'll do next. Zatoichi wakes up and nonchalantly cuts at the air. Three dead flies fall to the ground, and in doing so set the tone for the film: this one's going to be kind of zany, at least until it's not anymore; at a certain point, human life is worth as much as a fly's.

(The previous film, Zatoichi and the Chest of Gold, did the same sort of mood-setting in its memorably stark opening credits. I sense that Chest of Gold may have indirectly influenced many opening credits sequences in Chinese martial arts films of the 1970s. This is just poorly educated conjecture on my part.)

Humor has always been part of the Zatoichi films to varying degrees. It's difficult to have a story about a blind masseur turned swordsman without at least acknowledging the absurd and/or comic aspects of the character. In Flashing Sword, the first half of the film finds Shintaro Katsu playing Zatoichi as a bit of a clown. Our master killer knocks people off a small bridge, falls down like an oaf, plays fraidy cat in a fireworks shop, and mugs for the camera as he gobbles a heaping bowlful of rice. Zatoichi has always had a hint of Mr. Magoo in him, mostly as a kind of defense. Yet when he's bashfully talking to Miss Kuni (Naoko Kubo) and so smitten he can't keep his cool, I couldn't help but think of another cartoon character: Goofy. He has reverted to boyish adolescence and is completely defenseless against her. I almost expected him to say "Gorsch" after he called her pretty (or whatever's Japanese for "gorsch"). 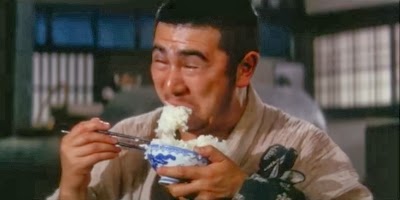 In a lot of ways, Zatoichi's Flashing Sword works because of its major shift from comedy to bloody tragedy. Our hero finds himself nursed back to health after being shot in the back. Out of gratitude to those who saved him, he becomes embroiled in a battle between two clans for control of a ford.

Zatoichi has always sought penance as a means to a normal life, but he's never able to escape his past sins. He will always be a fugitive and an exile even if that's the last thing he wants to be, and so he's forced to wander endlessly and repeat a pattern of brief hope and inescapable disappointment. In that pattern, his mere presence hurts others around him, compounding the guilt of other sins. There are brief reprieves from his itinerant existence, and the bright settings and lightheartedness in the first half of Flashing Sword emphasize this fleeting joy. Yet when the plot grows dark, Zatoichi returns to darkness, and he does so literally in the film's incredibly brutal and memorable finale.

In the last shot of Zatoichi's Flashing Sword, we might have one of the better visual representations of Zatoichi's torment. Divorced from the context of the scene, if we could look away from the tumult and upwards, what's happening would be wonderful, a sky full of delight and secret triumph. But with Zatoichi there before us and Katsu's facial expression, we are far from the light of heaven and wonders of summer; with him, this is perdition, and it is cold.

Minutes before, Zatoichi laments his blindness. He wishes he could see the fireworks. Yet maybe he understands how perfectly these brief flashes of light in the dark describe the path he'll have to tread for the rest of his life.
Posted by Hubert at February 09, 2014