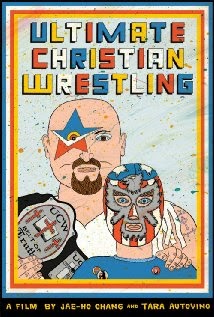 As you know I recently got a copy of Jae Ho Chang's Ultimate Christian Wrestling on DVD because I had contributed to the Kickstarter campaign to get the film really finished. We here at Unseen had connected to the film when in played the Korean American Film Festival New York in 2012. We ran multiple reviews (here and here ).and Mondocurry did an interview with the directors.

Watching the film again I was struck by how much better it played a second and third time. Say what you will this is a super little film that is even better than I first took it to be. To be perfectly honest when I saw the film the first time it had two things going against it, first it was as an on line screener which is not always the way to go since it meant I had to watch it on my laptop. That's not the best way to see the film. The other thing it had going against it is the notion going in that it's about wrestling or Christianity. I know the film  quickly shakes you of that feeling, but at the same time not being able to instantly click with the film, having to wait until about a half hour in before the so that's what this film is feeling kicked in lessened the enjoyment.

I don't want to re-review the film. Largely because I can't say much more than I did the first time other than to say it's better than I first thought. I did however want to take this time out and say that this is one to put on your track down lists. I've had some conversations with Jae-ho Chang and right now the film's only available to the Kickstarter supporters, but it will soon be available to everyone. Jae-ho has promised to let me know when that happens so that you can get copies when they become available.

Tuesday at the Film Forum they are running the rarely screened Elstree Calling. The film is one of those all singing all dancing all sound film reviews that studios cranked out to bring people in to the early sound films. Its more a curio than anything and for completeists.

I'm not a fan of the film and I never reviewed it here at Unseen however I did at IMDB. My IMDB review reads as follows:

Hitchcock's WTF movie. He's co-director of a static early sound film that is the British version of the all singing and all dancing review films that Hollywood do in the late 20's early 30's. Only it's less opulent and it has a real feeling of being a filmed stage play. It also suffers from weak music and dancing and unfunny comedy bits.

I know the surviving prints are shorter than then what it once was which is probably better that way. Since some of the bits seem to go on way too long.

You're either going to love this or hate it.

For me once was enough.

For those curious as to where Unseen is going over the next few weeks here’s the major marching orders:
-This week we end the Month of Zatoichi
-The first week in March is a look at nine titles playing at Rendezvous with French Cinema.
-This is followed by a week of films that played the first week end of the New York International Children’s Film Festival (even more reviews will be appearing all through the month)
- Then a long time in coming (ie. It’s been moved around numerous times since October) look at semi-recent animated films.
-This will be followed by three weeks of “random titles” some of which will hopefully get bumped for coverage of New Directors New Films.
-Mid April to the first week of May will be three weeks of Tribeca coverage.(with perhaps a stop by Subway Cinema’s Old School Kung Fu series Easter weekend)
-In May we step away from the modern day with a step back with three classic film series- Lash La Rue, Dr Kildare and Kirby Grant and Chinook. And we finish things out with some classic adventure films
-After that I’m lining up some random titles to see how they shake out- but look for reports on some Cinerama titles, Ghibli Shorts and horror films.- which takes us into mid-June and will put us on the cusp of the New York Asian Film Festival and Japan Cuts.

Of course expect reviews of new films -with a new DeNiro film called The Bag Man and the Russian 3D IMAX war film Stalingrad being reviewed this week- and more coverage of film festivals including more Film Comment Selects titles, some SXSW titles and who knows what else. I’m also talking with Randi about reviving her Secret Cinema as a regular weekend feature. So there is tons of stuff coming.

And now as we near the end , a look at some links ala Randi.
A reference to know to appreciate True Detective
Old Films that fall into Public Domain
50 works of video art (Including the Cremaster films)
The fate of one Godzilla suit
Illustrated battle of farts
Classic Movies in miniature style

And finally because I Bully asked what I did with the third birthday picture, I close with that. 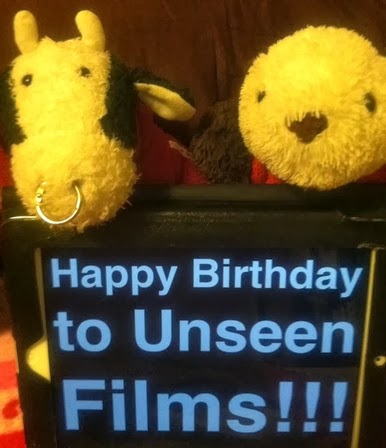