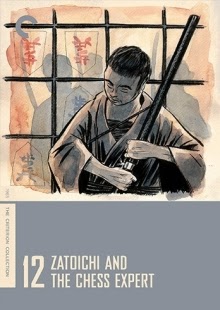 Zatoichi and the Chess Expert was definitely the first Zatoichi movie I watched way back in high school, and I realized that a couple minutes into the film. Recalling this movie in my review for The Tale of Zatoichi, I wrote that the blind swordsman blew a tick into a man's eye as an expert evade. In fact, it was the burning ember from Zatoichi's tobacco pipe. That makes more sense than a tick, and I'm surprised I forgot this scene happens on a boat. I remembered very little of the movie apart from generally liking it, but now I know why. This is a film that needs to be seen as part of the series rather than on its own. Had I watched a few of the previous movies before Zatoichi and the Chess Expert way back in high school, the film would have been a resonant and well-observed chapter in the unfolding story of Zatoichi.

That's to be expected this far in. When Alec reviewed Zatoichi's Revenge, he mentioned that he had some difficulty jumping into the film series midstream since there were so many questions about continuity. This is the same thing that keeps people from buying long-running comics or even watching shows mid-season--that unmistakable intimidation of in media res. Starting from the beginning isn't always necessary (e.g., you don't really need to read A Study In Scarlet before The Hound of the Baskervilles), but it also depends on where you jump in. Shintaro Katsu's performance is a strong throughline, and the basics of Zatoichi are quickly hewn in each film, and yet the movies vary in plot and quality, so some may be better mid-starting-points than others.

Zatoichi and the Chess Expert is the third film in the series directed by Kenji Misumi, who also did the original film as well as the eighth film, Fight, Zatoichi, Fight. What's struck me most about this movie is it's a blend of "Zatoichi's greatest hits" and the way it uses variations on a theme. The dice game hustle used in previous films figures heavily in the plot, for example, part of which involves buying medicine for a sick little girl. The other half of the story, in broad strokes, involves an uneasy friendship with a traveling samurai. While I found Zatoichi and the Doomed Man a little stale because it was so rote, Chess Expert uses the familiar tropes of the Zatoichi films to deepen the pathos of the character and even provide a sense of story progression. 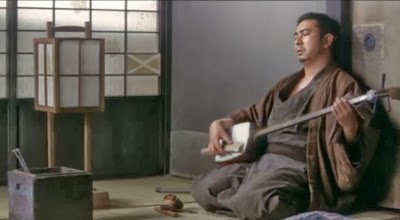 Part of the intrigue comes from the interactions between Zatoichi and the chess-playing samurai, Tadasu Jumonji (Mikio Narita). Their back and forth during the games reveals, among other things, a kind of slippage in Zatoichi's character. Though blind, Zatoichi's been in control of so many situations. In this film, he stumbles. His old tricks don't always work, and he makes mistakes a little more often than he should. Is it life on the road that's wearing him down? Is it life in general? As these questions floated in my head, I became especially interested in the verbal chess games between Zatoichi and Tadasu. They're sizing each other up as swordsmen and revealing their martial philosophies.

Chess Expert offers forward movement through a combination of acknowledgement and variation. There's another woman named Tane here (played by Kaneko Iwasaki), which is an obvious callback to the first film as well as the fourth film, Zatoichi the Fugitive, and also a nice nod to the idea of a replacement Chiyo in The Tale of Zatoichi Continues. There's also a sense of thematic continuation from the baby in Fight, Zatoichi, Fight thanks to the sick girl in this film. So we have two familiar ideas in the series that have been joined: lost love and fatherhood. (Joined by moral duty and kindness, another familiar part of the character and his travails.) Zatoichi still dreams of domesticity, but again, this is something unattainable, constantly subverted by the sins of his past that won't be forgotten and cannot be absolved.

Zatoichi and the Chess Expert may not be the most action-packed film in the series or one with the most memorable set pieces, but it's a film with some surprising emotional stakes and danger. By the end of these 26 Zatoichi movies, I'll have to consider for myself which films are most essential to the loose narrative and the realization of the character. Chess Expert is certainly one of them, and it gives me high hopes for Misumi's three remaining Zatoichi movies. (Based on the brief plot synopsis I've read, I'm especially looking forward to Zatoichi: The Festival of Fire.)
Posted by Hubert at February 14, 2014