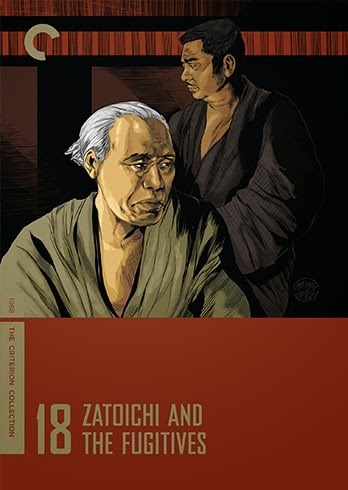 Mean, cruel and nasty this is one of the darkest films in the Zatoichi series. Its a film who's darkness I found disturbing.

After getting caught in a rain storm Ichi takes refuge in an abandoned house. Ichi is aware that there is some one there but acts as if the girl hiding there isn't there. When the rain passes he heads off on the road where two surly guys try to torment and rob the blind man...its the last thing they ever do. The killings are witnessed by the girl. It transpires that she is traveling with a group of fugitives with a nasty reputation.  They are heading to town where a local yakuza leader is now a man of the law. The fugitives need a place to hide and the boss needs muscle...Ichi of course gets involved.

Darkness doesn't make a difference to a blind man

What makes the film so disturbing is that the bad guys in this film really are bad guys. They torment Ichi at every turn, by throwing dirt in his food, pricking his face with their swords and knives, trying to get him to step on blades and attacking him frequently. Ichi even comes up on the short end of a battle. Normally the villains in the series have some attempt at being good people,but not here. The bad guys are really really bad. These guys are some of the nastiest I've seen on screen.

Interestingly as if to balance the villainy of the fugitives, most of the people are solidly good, there is no grey in this film only black and white.

The bloodiest of the series to this point, this is also a film where Ichi gets severely wounded. Abused by the fugitives at one point, he spends the rest of the film dealing with his wounds, even as he's fighting for his life. We've never really been this afraid for Zatoichi, and while I know there are 8 more films and a TV series to go, I still was afraid he was going to expire before the film ended.

While most definitely a solid entry in the series (it may very well be one of the key films) I'm not sure what I think of it. There is something about the overly gritty, realistically violent film that doesn't sit well with me. While I like many of the sequences and love that I can root for Ichi to kill everyone, I'm  bothered by the toll that Ichi is forced to pay. Is it too much?

My skittishness aside this is an import film in the series and a must see.
Posted by Steve Kopian at February 20, 2014