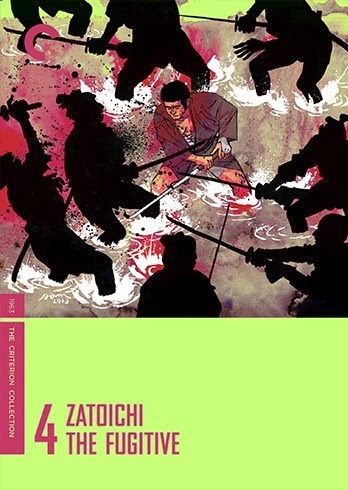 Fourth film in the series opens with some stunning real world shots. The previous film had been almost completely stage bound, which was fine for the tale it was telling but here the fact that the film has been filmed outside makes the film so much more alive and real. All of the real world colors, in particular the shades of green trees and the blue sky add so much to the film.

Also making an appearance is a good dose of humor. While there is some humor in the previous entries, they were largely serious films with dark tales of loves lost and betrayal. Here the film begins with Zatoichi climbing into a sumo ring and pretty much beating all comers. its a wonderful moment that signals the introduction of something that would allow the series to be something more than just the same old same old.

The plot of the film spins out of Zatoichi's winning in the wrestling matches. As a result the gangsters who were running them have put a price on the blindman's head. Complications arise when Zatoichi kills their leader. The heir to the gang then hesitates killing him which sparks a later confrontation. In the meantime a lost love of Zatoichi is found to be romancing one of the gang.

As good as the Zatoichi films are individually there can be a sameness to the plots.There is almost always gangs, gambling and women involved. You know there will be fights at the start and end with lots of talk in between. Frequently Zatoichi isn't so much the main character as the spoon that stirs the pot. He isn't a catalyst as such since his role is much too big for that. The plots he takes part in are in their way samurai soap opera. This isn't to say they are bad rather they are just needlessly convoluted with similar tropes appearing again and again. This isn't to belittle this, or any other Zatoichi film, rather it's to state that the plots will frequently sound like been here and done that, when the films transcend them.

Zatoichi The Fugitive (as opposed to Zatoichi and the Fugitives the 18th film in the series) is one of my favorite of the 26 Katsu films. First off we have a nice influx of humor into the story, we have the real world settings but added to that we have some amazing sequences that really make it special, We have the opening wrestling match, the sequence where the samurai and Zatoichi pass each other on the stairs trying not to be heard by each other, the wonderful sequence where Ichi walks into the yakuza lair and makes them think twice about taking him on...and that's just the first half of the film. Later in the film the final confrontation is one of the best fights in the whole series.

The film benefits from a less static style which marked the previous film. There are close ups, establishing shots and all sorts of in between. The film feels more like a modern film and less like a tableau. (which worked in the previous film).

I'd like to say something about the performances, but I'm not sure what exactly to say or where to start. I suspect the best thing to say is that the performances help the real world setting make the film seem like a real series of events.

One of the best in the series and a must see.
Posted by Steve Kopian at February 06, 2014