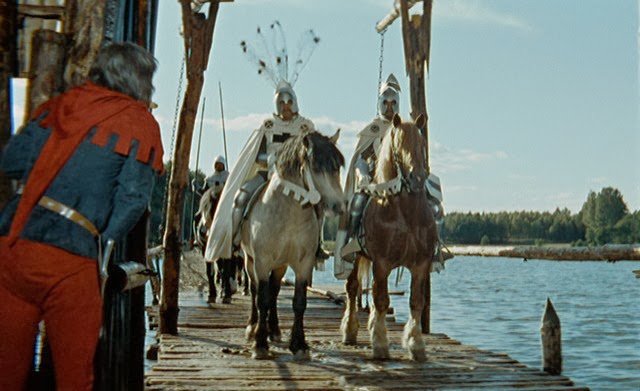 In prepping the Martin Scorsese Polish Film series at Lincoln Center I started to dig through my DVD collection and pulled out a few titles to get in the mood for the actual screenings. With my dad out of the house and the big screen in the living room free I made myself dinner and then sat down to watch some movies.

The first film I pulled from the stack was the import version of Black Cross which was titled  Knights of the Teutonic Order on the region 2 DVD and sat down to watch a three hour knights in armor epic from Poland.

Almost instantly I almost choked to death on my food...where is MST3K when you need them? I was awe struck and giggling from the get go. This tale of the Teutonic knights battling with a Lord who didn't like the idea of bowing down to them is the sort of thing that would have been badly dubbed into English and run at 3am on the late show. Yes it's spectacular but it's so silly.

What is this? The editing is disjointed, the plot jumps around and while there is a very real sense of seriousness it plays almost like a kids film.

Classic of Polish cinema? Oh please no. Who are these people and what are they doing? I don't know. To be certain it all looks spectacular but after 45 minutes I really didn't know what was going on. Actually I had the feeling I was watching the cliff notes version.

Two more hours of this? I think not. I turned it off. I'll try it again down the road but unless I can find something that makes the movie click I think my second attempt is going to be much like this first one- short and sweet.
Posted by Steve Kopian at February 10, 2014