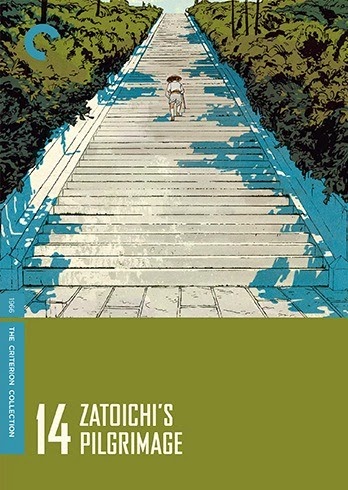 I don't want to give up my faith in people... - Zatoichi

When the Zatoichi films were all released on DVD in the US for the first time about 10 years ago there was one film not included in the release. My investigation back in the day had the film turned up a comment saying that the film was intentionally held back from release for two reasons, the wishes of the family of star Shintaro Katsu as well as the film not being like the other films in the series and  being less action packed. I don't know how true the story of the reasons is, but I do know that the only way I ever found to get the film until the Criterion release was as an unsubtitled DVD from Japan/Yes Asia.

Having owned all of the Zatoichi films on DVD there was no reason to upgrade to the Criterion Box except to get this film, however since I really wanted to see Zatoichi's Pilgrimage and it meant getting all the films on Bluray in a kick ass box set I decided to splurge and get the collection.

Lantern for a blind man? You have a wry sense of humor...

Easily one of my favorite Zatoichi films, this change of pace truly is something wonderful.

The plot of the film is set in motion with Zatoichi setting off on a pilgrimage of 88 temples to do penance for all the people he's killed. However from the outset things go wrong and his prayer not to have kill anyone is broken almost instantly. Attacked by a lone man Ichi must kill him to survive.  Heart heavy he once more sets off on the road followed by the man's horse who directs him to the dead man's sister who tries kill him. Ichi doesn't move and is wounded. Feeling remorse she tends to Ichi and takes him in.

It transpires that the girl's brother was hired by a local gang leader to kill Ichi, the hope was to get the brother out of the way so he could take over the village and surrounding land. The villagers are aware of the plan but hope Ichi will take on their enemy and leave their hands clean.

This is in a weird way it's an interesting riff on the Seven Samurai with the role of the farmers much less noble. They are in their own ways just as bad as the gangsters. They won't even help the one protecting them. As Ichi remarks earlier in the film the good people are rarely as good as they pretend to be.

What I love about the film is it really is operating on a level beyond the action. Notions of regret, redemption and forgiveness run all the way through it. Ichi's journey, and this is a journey, is marvelously emphasized by the long shots of him on the road or at the bottom of long staircases. We know the path he is traveling because of the long distances we see him travel.

Over the course of the film we are forced to ponder if violence necessary? More importantly is if we choose to do nothing what does that mean for others? I may choose the path of non-violence but that may mean someone else has to choose violence. This is a very heady film, probably the most heady of the entire series and it's a shame that it hasn't readily been available before since it colors the character and the series in a very interesting light.

Of course if you're not like me and prone to love philosophy there is the story and the set pieces, from the opening stair climb, to the battle on the bridge, to the feast and finally the final battle that will get your blood pumping.

This is a great film even by the high standards of the Zatoichi series and a must see.
Posted by Steve Kopian at February 16, 2014