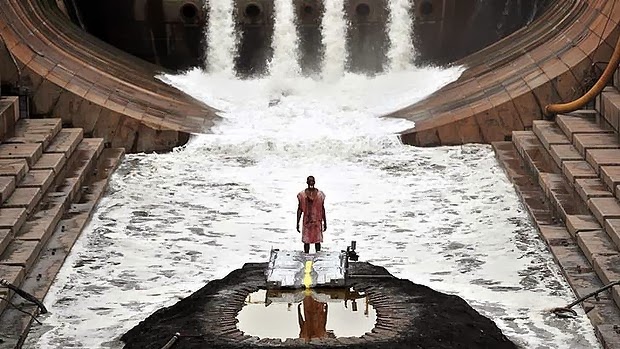 If you read some of the reviews for Matthew Barney's latest film you'd think it was going to be some horrific nightmare of disturbing scenes with everything literally covered in shit, but that's not the case. While the brown  stuff,  and other bodily fluids, play a key role it's not splashed over everything. Actually I was kind of hoping that the film would have some sort of outrageous awfulness so that I could rant about the alleged shocking nature of it all, instead the most shocking thing is that Barney has made what amounts to an eminently forgettable and rather dull art film.

I'm going to try and be brief here, something that Matthew Barney can't be accused of. You'll forgive me if I don't go into great details, I neither feel the need nor do I remember a great deal of the film, I was thinking of other things and watching the audience around me.

The film is nominally an exploration of the cycle of life, death and rebirth as symbolized by Norman Mailer, the Egyptian gods and Pharaohs, cars and a river of poo. The film crisscrosses through Mailer's wake where he, the gods, the Pharaoh and various celebrities dine, talk sing and play music. There is lots of talk of excrement and how if you eat it you'll get in touch with other peoples wisdom. Hey what ever floats your boat. It goes on through three parts and takes a total of about six hours to get through from start to finish.

Nothing here is shocking, except for some of the performances from name celebrities which are awful and most of the dialog which is as badly stilted as I've ever heard in any film ever (and I include mangled English translations of Chinese Martial arts films). I completely understand why the dialog is bad- it has to serve an artistic purpose and not be realistic, but at the same time its frequently god damned stupid. I frequently was laughing at it not with it.

Truth be told, and to be perfectly fair Barney has made a film of moments. There are grand and glorious moments or sections where the music and the visuals come together (see above) to create a glorious moving couple of seconds or minutes. But its all fleeting as a soul stirring moment will be followed by a stupid one such as the Bull Fighter song at the end of part one which is wrecked by a dinner guest. Yes, he's suppose to break the moment but he also stops the film dead. He broke the spell I was in and outside the film again.  In later parts glorious visual set pieces are followed by terrible looking bits that also kill the flow just as you think its all coming together, finally. The fact that the spell keeps getting broken ultimately leads to a boredom or disinterest, why keep watching when it only breaks your heart.

What annoys  me is that Barney has made a film that needs to be explained. There were pages and pages of notes in the programs handed out by the ushers at the Brooklyn Academy of Music. Yes, you can follow the "plot" without reading them (I read them afterward), but if you don't read them several important points that Barney was trying to make are going to be lost on you. For example its not readily clear who the guy who appears in the bathroom with the colostomy bag at the beginning is but after I read the notes I knew. In reading the notes on the train home I had tons of ah ha moments. I should have had the Ah Ha moments in the theater, not on the train home.

If you've been reading Unseen Films for any length of time you know I hate films that need endless pages of notes to make sense, and this is one of them. No work of art, no film, should need to be explained. If you've made art that is so personal that you need to give notes either you've made something way too personal, or you've left something out. I can understand if you have to give notes to put a film/art in context with in the culture it was made, but Matthew Barney is an American who lives in New York, in theory this is my culture, this isn't say an Indian movie.

Ultimately River of Fundament misses the mark. Its way too much of everything, with not enough good stuff to sustain six hours- or at least six hours in one sitting.
Posted by Steve Kopian at February 17, 2014