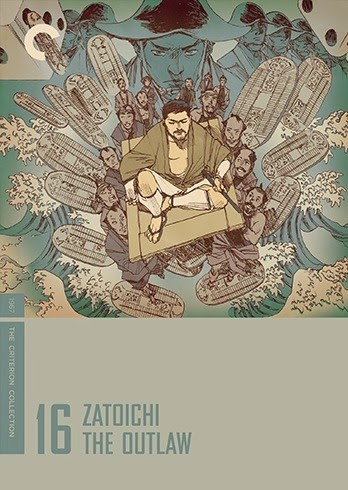 The title sequence of this film is a killer. It  has Ztoichi at a shooting gallery (they use bow and arrows). While eating he listens as a man misses his shots. As an ominous chord is struck the title The first feature by Katsu Productions appears. Then the shooter, annoyed by Ichi's kibitzing pulls him into the arcade and forces him to take some shots. Ichi begrudging agrees, but does so at the small targets. as everyone gets a good laugh Ichi takes a shot...A bullseye - a gong is rung and the title Zatoichi The Outlaw is splashed across the screen


This time out Ichi is sucked once more into the battle between rival gangs. One gang is kidnapping the farmers who can’t pay at their gambling den. Their opposite number draws the swordsman into the battle claiming to be for the people. Of course they are just trying to take total control of the situation. Add to the mix a swordless samurai who won’t fight, peasant uprisings, severed limbs and dash of politics and you have a heady mix.

With Katsu taking control of production the series seems to be shifting gears in any number of areas.

First this is the first of the films that seem to have been filmed entirely on location. I’m sure that the interiors were done on a sound stage, but at the same time they feel as though they were real houses. More importantly all of the exteriors feel real. In going through most of the films for this look at all of the films in the series you realize that in many of the earlier films the exteriors were shot on sound stages (especially the night sequences), that’s not the case here and it’s wonderful. What I love is that the real location filming allows for some stunning sequences, especially toward the end of the film where we get several battles in the rain and another where the wounded Ichi is carried on a board in order to rescue one the samurai who is being hauled off for execution. This is the film where you really get a sense that the story is taking place in the real world with real weather.

The action in the films seems to have been taken up a notch. Blood flows freely, arms and heads are severed. Even the normally seemingly indestructible Ichi is badly wounded and bloodied (notice how blood flows down his forehead during one of the rain battles). The blood actually adds weight to the proceedings. In this film the fighting has a terrible cost- and reinforces the repeated line about blood spoiling the ground.

The film is also very politically charged. The lines between the gangs, the government and the people is very much in play. The struggle for control is in the fore front and where in other films you get hints of it , in Zatoichi the Outlaw its very pronounced. The abuse faced by the peasants is very much on the films mind and it goes to great lengths to put Ichi on the side of the down trodden with him talking about how he has no use for anyone who doesn’t do anything for society and the people.

What is also really cool with this film are the small details. Watch all the small background details all through the film from the street traffic in the opening arcade sequence to the collateral damge in the fight scenes, swords go through walls, top knots are cut, and damage is inflicted by careless swings of the sword. The battles between Ichi and his opponents take on a desperation, gone are the carefully choreographed fights, people squirm in the mud, people don’t die instantly. It may not sound like much but it adds a weight that I for one greatly appreciated.

I like this film a great deal, and if the film won’t remain at the forefront of my brain as a favorite Zatoichi film, it’s only because there are 26 great films and they all can’t be first and foremost.
Posted by Steve Kopian at February 18, 2014