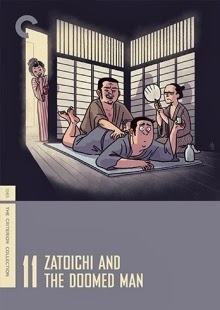 Early in this month of Zatoichi, I set a certain personal expectation on the franchise: I would think of the series less as a tight 26-film cycle and more as an ongoing comic book series. (Or maybe even as a season of a TV show.) This would place less pressure on each film as being part of a cohesive, ongoing storytelling project, allowing the movies to exist as their own animal. This would also allow me to enjoy each film on its own terms and consider each movie as its own statement on Zatoichi.

With all that in mind, Zatoichi and the Doomed Man, the eleventh film in the franchise, may be the first Zatoichi film I've written about that's left me a bit cold. There's so much it has going for it, at least on its surface. The set-up involves Zatoichi trying to clear the name of a man condemned to die whom he meets in prison in the film's prologue. The film is directed by Kazuo Mori, who also directed the fast-paced second movie in the series, The Tale of Zatoichi Continues. There are fine moments of comedy, particularly involving the morally bankrupt monk played by Kanbi Fukiyama, and there's a certain sense of the universe of Zatoichi being filled with sleazeoids and cheats who are simply trying to get by.

And yet what should be a brisk movie about grifters doing their thing feels a bit rote, even despite a good performance (as usual) by Shintaro Katsu and a pretty good finale, all things considered. There are memorable-enough scenes in Zatoichi and the Doomed Man, like the archery bit, or the moments of mistaken identity (if you've seen the movie, you know what I mean), or the great philosophical scene in which Zatoichi encounters the ocean for the first time. And yet these feel like bits rather than something of a whole, like riffs on a well-known theme rather than familiar harmonies that open new doors. I remember scenes but not the film; extracts, but that's it. Even the transitions between scenes feel abrupt, as if any pillow words (or pillow images) were excised to keep things moving even to the detriment of rhythm of the film. 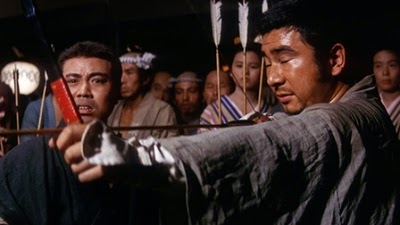 I think the reason for this coldness I experienced has to do with two things. For one, we're eleven movies into the Zatoichi series and, as much as I love the character, there are times where events seem a little too familiar. Like any run in an ongoing comic book series or any stretch in a TV show, there will be issues and episodes that are just okay at best. Such is The Doomed Man. Serviceable but not essential, sort of like a fill-in arc or a filler episode with its own decent parts.

The other reason I felt cold about The Doomed Man may have a lot to do with coincidence. In Mark Twain's "Fenimore Cooper's Literary Offenses"--a scathing old-school diss-track in the form of angry criticism--Twain wrote about keeping apparent miracles out of stories, but if they should occur, the author must make the miracles seem plausible. The archery feats of a blind masseur are in themselves a kind of miraculous thing, but Zatoichi's sightless abilities are well-established by now, and I will allow this miracle to stand as part of many other suspensions of disbelief. What I won't allow legs is bald coincidence, and so much of the plot machinery in The Doomed Man is built on coincidence. (As George Saunders, one of my favorite living writers, points out in his non-fiction piece "The United States of of Huck," Twain himself committed one of the most egregious acts of coincidence in writing with the final chapters of The Adventures of Huckleberry Finn.) While a blind man hitting a moving target with an arrow is just fine for me, there's something about overdone interconnectedness that strains credibility. (Don't ask why. I don't know.)

Mori has one more Zatoichi movie in the 26-film series under his belt, 1972's Zatoichi at Large. I wonder what that will be like. What's interesting here is comparing a film by the second Zatoichi director to Fight, Zatoichi, Fight, the second film by Kenji Misumi, the original Zatoichi director. There was something novel about the second Misumi effort, whereas this second Mori film feels so played out even though it should stand out in theory. It may also be my own sense of being Zatoichi'd out mid-month. I love the character still, but this movie feels like something for completists rather than something essential.
Posted by Hubert at February 13, 2014