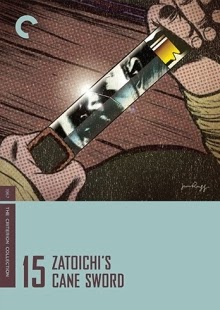 Heroes become attached to their weapons. You can't think of Luke Skywalker without his lightsaber or James Bond without a Walther. There's also a strange fetishization of weapons that comes through the act of naming. In the case of The Hobbit and The Lord of the Rings, there's Sting wielded by Bilbo and later Frodo, or Glamdring wielded by Gandalf; and this is all part of a tradition that Tolkien knew well, going back to Arthur and Excalibur, Thor and Mjolnir, Beowulf and Hrunting, and to the blades Gram and Balmung of Siegfried. A sort of iconographic magic is imbued upon the arms of cinematic heroes and comic book heroes: Indiana Jones and his whip, Captain America and his vibranium shield, Batman and his batarangs. In Zatoichi's Cane Sword, the fifteenth film in the series and definitely one of my favorites, we get to learn a little bit of the fascinating lineage of Zatoichi's iconic weapon. The cane sword even provides a larger symbol for his recurring mental state as well as the moral imperative that is at the heart of many Zatoichi films.

In Cane Sword, our hero meets an aged blacksmith whose mentor crafted Zatoichi's own blade. The old man tells Zatoichi that there's a small crack near the hilt of the sword, and that using it will cause the blade to break. Zatoichi takes this as a sign that he should give up his ways and attempt (yet again) to settle down and lead a normal life. If you've watched at least five of the Zatoichi films before this one, you can probably figure out that this doesn't go as planned, especially since there are so many baddies in town.

There were some continuity issues I noticed between The Tale of Zatoichi and The Tale of Zatoichi Continues regarding the blade. At the end of the first film, he seems to give up his own sword, but he's got it back at the beginning of the second film. A bigger issue to consider is what happens to the blade at the end of Zatoichi the Fugitive. While that would be an ideal explanation for the sword's current state, Wikipedia suggests that the cane sword in this film is supposed to be Zatoichi's third blade. A convenient retcon to be sure, and yet it makes no actual sense in the continuity of the film series. I don't even see how it works in the fictional histories of Zatoichi or the blacksmith. It may be best to not think about it. This was not a cohesive, fully-planned-from-beginning-to-end film series, so these muck-ups are bound to happen. 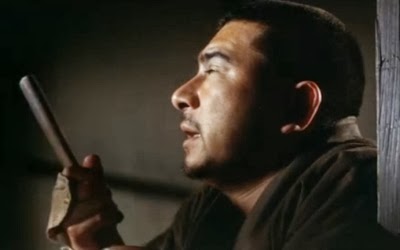 Shintaro Katsu continues to be solid as our main man, once again torn between a desire for a trouble-free life and the inability to escape trouble. Special kudos ought to go to director Kimiyoshi Yasuda, particularly for the memorable finale, and also to screenwriter Ryozo Kasahara for his strong thematic material. Yasuda also directed Zatoichi on the Road and Adventures of Zatoichi, and he has further films in the series coming up; Kashahara also has another Zatochi film he penned in the near future (Zatoichi Challenged) and apparently wrote an early draft of the Zatoichi update/pseudo-remake Blind Fury.

But I want to come back to the sword since it is the focus of the film. Weapons are extensions of our heroes, and the cane sword has always been a fitting symbol for the Zatoichi character: like the sword, the man seems like something else on the surface (i.e., a blind masseur), but when unsheathed, his true nature is revealed (i.e., a killer). I've mentioned Wolverine before in a review or two of these films, and I can't help but feel some connection between Logan's retractable adamantium claws and Zatoichi's cane sword. Logan's claws were something he was born with, and I think even if Zatoichi tries to deny it, his killer instinct is innate. He cannot deny his true nature in the same way that a blade, if it could express itself without human hands, would have to cut in order to do so.

And so there's the matter of the crack near the hilt and only one more kill with the cane sword. That's most Zatoichi movies in a nutshell. He tries to settle down because he'd rather preserve his own life, as if something within him would break if he kills again. And yet the world Zatoichi lives in is full of evil, and the good people are all too weak to defend themselves, and even though Zatoichi is a killer, there's good in him as well. For the downtrodden, Zatoichi risks breaking and continues on, wandering and drawing. Makers can imbue their materials and works with skill, and the wielders of such works can come to resemble the work and its material. By the end of the film, Zatoichi is not defined by the sword per se, but it's the inner stuff of Zatoichi, that drive in his nature, that manifests in the blade in his hand.
Posted by Hubert at February 17, 2014