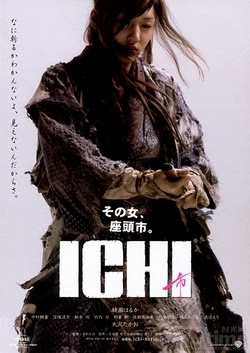 This is a repost of my IMDB review of ICHI from when the film came out. I figured since we're doing the month of Zatoichi I might as well include it.

Rethink, and perhaps continuation of the story of Zatoichi, the blind swordsman. here the blind masseuse and gambler has been replaced by a blind woman who is a trained musician. As the film begins she is looking for a certain man. One can pretty much assume that she wants to kill him. While staying with a blind woman some toughs decide to rough up her host when they won't pay for her services. A wandering samurai named Toma tries to help, but its Ichi who kills the men. Following Ichi Toma ends up hired as the protector of a village. They think Toma killed some of the gang that had been running rough shod over them, but it was actually Ichi. As the gang moves to take revenge, Toma and Ichi grow close. How it all plays out is the movie.

Some people really don't like this movie. I've seen some things that have blasted the film for not being a real Zatoichi film. Some people have taken it to task for having poor performances, especially in the lead. I really liked the film. I had no problems with Haruka Ayase as Ichi. I found her fine for what the part is. This is not a real restart of Zatoichi, its more a continuation with flashback sequences implying that the elder Ichi was this girl's father. Its a film that is going in a different direction.

I have no trouble with the film being anything other than its own thing. You can't really compare it to the best of the Zatoichi series since its not really fair since those films had a couple of chances to hit their stride before they got it right. Its certainly better than the weakest of the series. If I were to pin point the film's flaws it would be the over length, I don't know if the film really needs to be two hours. Certainly it felt longer while watching it than when it was over. The other flaw is that the films budget at times makes it seem almost like a TV movie, especially with the use of computer generated blood.

I like the film a great deal and would recommend it, especially if you let the film do what it wants to do and not take for what its not, say a continuation of Beat Takashi's take on the characters. Worth a rental or an evening at the movies.
Posted by Steve Kopian at February 18, 2014