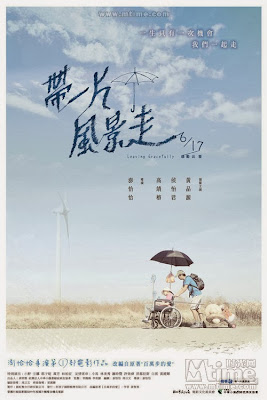 The joy of running Unseen Films is I have an excuse to look for off the beaten track for films. Thanks to this website I can spend extra time going through the various racks in the DVD stores. This means that I can pick up more films that look promising but normally I might not touch. My finding Leaving Gracefully was the result of  going off the board, I found it in a store in Chinatown in NYC. It has a box (see above) all in Chinese and except for one word of English- English under subtitles and an interesting picture that made me want to know more.

Based on a true story, this is the story of a couple, Hsiu-mei and Chih-hui, in Taiwan who are shaken when she is diagnosed with a rare brain disease called Spinocerebellar Ataxia. The disease will slowly destroy all her motor control. Initially everyone, including their daughter, have a kind of denial about the situation, but as things worsen they begin to come to terms with it. Eventually Chih-hui decides that he's going to take the time left with his wife and walk with her (in a specially modified wheelchair) all around Taiwan. As time passes the family finds hope and each other once again.

While far from a perfect film, Leaving Gracefully beautifully manipulates your heart strings. I found it very hard not to get misty while watching the film. There is something about the ability of the human spirit to find joy that is beautifully illustrated in this film. Yea there is sadness but at the same time Hsiu-mei's joy at seeing temples, or the ocean is magical.

Credit the cast lead by Rene Hou as Hsiu-mei. She manages to get all of the physical and emotional changes just right. Even more importantly she makes it clear that there is a person inside the twisting body. There is something about the joy she shows when dealing with her daughter, listening to her play the piano, singing her happy birthday or simply comforting her, that brought me to tears.

I really liked this movie a great deal. And while it may not end up on the best of the year list next December, I'm guessing that this film is going to end up one I talk about all year long. Track this one down. 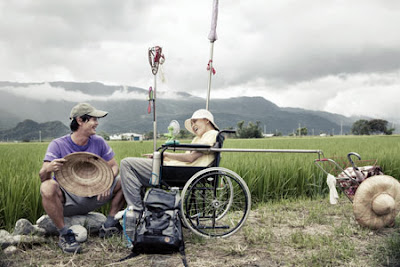