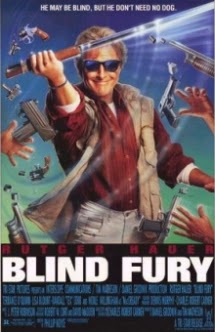 I say a version of the United States because most of the schlocky (but lovable) action films of that decade don't really take place in a familiar world but an exaggerated version of the world at that time, one in which rugged, ornery American values are the measure of all things. This goes for Commando, Death Wish 3, Cobra, American Ninja, Remo Williams: The Adventure Begins, the first two Rambo sequels, etc.; those jingoistic nationwide counterattack flicks like Red Dawn and Invasion USA; and the videogame Bad Dudes, perhaps the finest artifact of this imagined world, a game in which two meatheads in black tank tops and fingerless gloves have to save Ronald Reagan from a terrorist organization comprised of ninjas. This is one GI Joe nation, under a Christian God (and God is an American), with liberty, and justice, and unlimited ammo for all red-blooded cowboy rootin-tooters.

Welcome, Zatoichi, to The United States of the Eighties. Your new name is Nick Parker. 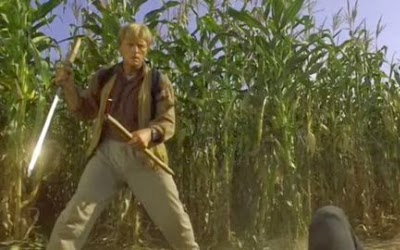 It's such a bizarre take on Zatoichi. For one, our hero isn't a masseur/reformed gangster who's constantly attempting to live down the sins of his past. Nick is a Vietnam vet who lost his vision during the war. He's nursed back to health by kind villagers, one of whom teaches him how to use a sword not unlike a katana. How does a random villager in Vietnam know how to do reverse-handle slashes like a seasoned Japanese practitioner of iaido or kenjutsu? Don't ask, and enjoy your stay on Planet Eighties, where all of Asia is sort of like the five boroughs in New York.

Blind Fury spins a story with similar beats to Zatoichi Challenged, with some nods to Fight, Zatoichi, Fight as well. (That makes sense since Zatoichi Challenged is like a thematic continuation of a story started in Fight, Zatoichi, Fight and also referenced in Zatoichi and the Chess Expert.) Nick visits America to reconnect with an old war buddy (Terry O'Quinn), but it turns out he's in Reno forced to make some sort of synthetic drug. After the death of his war buddy's ex-wife (Meg Foster) in Miami, Nick vows to take his war buddy's son to Reno to reunite him with his dad. Hacking, slashing, and riffing on recurring tropes of the Zatoichi series (e.g., thugs picking on blind men, gambling) ensues.

Since Blind Fury is a standalone movie, there's no sense of cyclical hope and disappointment in Nick's life as there is in Zatoichi's. Much of this is due to Nick's lack of regret. The screennplay by Charles Robert Carner (who also wrote the gloriously schlocky Gymkata) and Hauer's performance paint Nick a someone who's pretty easygoing. He isn't trying to go straight or atone. Instead, he's just a vagabond with a cane sword who seems to be having a good time. 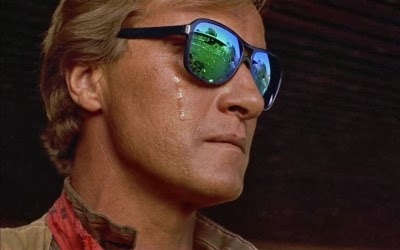 If Shintaro Katsu was playing Zatoichi, Rutger Hauer is playing the heroic Rutger Hauer; if Zatoichi's mission was to protect the downtrodden because there's too much evil and corruption in feudal Japan, Nick's mission is to kick ass and help people out because he's Rutger Hauer and this is The Goddamn United States of the Eighties.

Blind Fury heaps additional absurdity onto the blind swordsman idea in that almost everyone Nick fights is wielding a gun rather than a sword. Yeah, the blind guy brought a knife to a gunfight. That means the fights in Blind Fury are less about counterpunching as in the Zatoichi films and more about exemplifying the tenants of eighties badassery; it's still a case of "you try to hit me, I dodge, you get hit back," but Nick seems to smile coolly about the whole ordeal like it ain't nothing. Sho Kosugi, everyone's favorite 80s ninja, makes a guest appearance at the end for the requisite sword duel. The fights here are fine, but they don't have the same wow- or dazzle-factor as any of the Zatoichi films. As much as I like Hauer, no one movies like Katsu in those long takes. Really, Nick is a caricature who belongs with the proud pantheon of 80s action caricatures; Zatoichi is a  character, realized from the inside out (series continuity be damned).

Part of me wonders where they would have gone with Nick Parker if the Blind Fury series caught on. I want to believe that he'd have teamed up with other proud citizens of The United States of the Eighties--Remo Williams, John Matrix, the A-Team--and that he continued to save lives across this imagined land where spent bullet casings are as plentiful as pennies.