The Tale of Zatoichi Continues (1962) 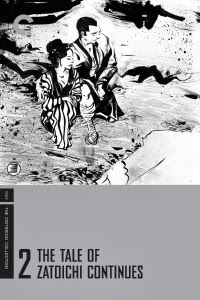 The Tale of Zatoichi Continues seems like a clunky title for a sequel, but it's an accurate one, and it's almost as if the first two Zatoichi movies should be seen as a double feature. There'd need to be a brief break between as a palate cleanse since each film is its own animal that deserves to be appreciated in its own way. The first is more of a slowburn, character-driven, period melodrama that leads to a climactic samurai battle; the sequel is a sort of hack-and-slash soap opera. Case in point: in the first film, it's at least 20 minutes until Zatoichi's sword gets used, and it's to cut a candle; in The Tale of Zatoichi Continues, there's an early three-on-one that shows the brutal grace of Zatoichi's reverse-grip fighting style.

According to the Criterion Collection website, the first Zatoichi film was such a hit that the sequel went into production in the same year. What's fascinating about sudden sequels like this is how the filmmakers capitalize on the strengths of the predecessor. The Tale of Zatoichi Continues is much more action heavy. It's faster as well, and not just because it's shorter. Everything is focused on Zatoichi, and it allows Shintaro Katsu to continue his refinement of various Zatoichi mannerisms.

Since the movie is so action heavy, I latched onto the way that Katsu improved his character's fighting style. It's a fine spectacle to behold given director Kazuo Mori's reliance on long takes and long shots. I was especially interested by Katsu's version of the sword-at-the-ready position. Zatoichi holds his unsheathed katana right in front of him, often dead center, the tip pointed at the ground, an almost neutral stance from which he can explode. His style is entirely reactive. If you don't make the first move I can't "see" you, he tells one of his opponents during a fight. Zatoichi is a samurai counter-puncher (i.e., you try to hit me, I dodge, you get hit back), which is why he uses that reverse-grip style. It's quicker to slash in close quarters and great for counterattacks against the broad and committed overhead strikes of a traditional samurai. 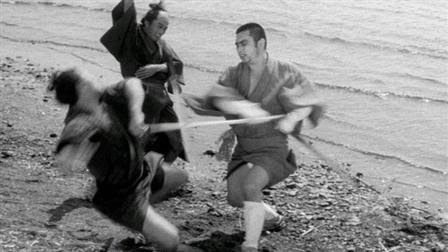 When Zatoichi first appears in this sequel, he's waking from a nap in a rowboat full of bullies. (If there was a studio audience present, this would be the perfect moment for laughter and applause.) Zatoichi is oblivious to them, or at least uses his blindness to feign disregard. If you weren't familiar with the first film, this would be Mr. Magoo-like. Yet this comic re-introduction to Zatoichi captures the plight of the character in this story: he's a wanderer who happens into trouble. In this case, all the bad stuff happens when Zatoichi, the blind masseur, is hired to massage a lord. This lord, without saying too much, clearly isn't cut out for his line of work. If the secret of his condition gets out, it could mean ruin for the clan, and so they send people to kill Zatoichi. Hack-and-slash-ity ensues.

If the first film was an introduction to a walking contradiction who wanders into a study of other contradictions, I think The Tale of Zatoichi Continues is about the walking contradiction's confrontation with his own past. There's the recent event involving the massage, which leads to a meeting with a woman who reminds him of the lover he lost; there's also a mysterious one-armed man who seems to know Zatoichi; and then there's noble Zatoichi's vow to keep a promise he made at the end of the first film. The plot is like a single domino triggering various lines of dominoes, all of which run parallel and eventually intersect, each clicking and toppling line a different facet of Zatoichi's life. Or to go back to the Mr. Magoo idea, it's as if Zatoichi has walked into the cluttered existential construction site of his own pulpy biography.

(Sidenote: Zatoichi ditched his sword at the end of the first film, but he has it back at the beginning of the second one. How'd that happen? Did he go back to town because his walking branch broke? Did he just buy another one?)

There's something so enjoyable about this second Zatoichi film even though I don't think it's an objectively better movie than the first one. Some moments have the bravado of a spaghetti western while others have the chintziness of an old soap opera, complete with the bubbling suspense organ. What The Tale of Zatoichi Continues excels at, though, is hinting at the blind swordsman's past and giving a larger sense of a quest to our lovable, deadly Magoo.
Posted by Hubert at February 04, 2014