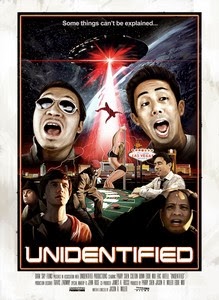 Must miss comedy horror film has four friends going to Vegas for a gambling trip getting in trouble with a loan shark before running into aliens in the desert.

How you react to this film will depend on a couple of things.

If you don't like our main character Jodie then you're doomed from the start. He's a too clueless for words young man who wants to be a comic artist. Why anyone in the film associates with him is anyone's guess and I wanted to punch him almost from the get go so it made for a long 89 minute film.

If you don't like found footage films you'll hate this. The whole film was filmed by Jodie and it does break or subvert the found footage rules so much as ignore them. Jodie films things, like the loan shark beating up his friend, that never would happen. They would have broken the camera and the friend and Jodie for trying to film. (And need I add that the battery never freaking dies?)

If you like things to make sense forget this film. by the time they get to the desert and have every bit of electronic equipment breaks down due to the aliens-except the camera I was pretty much done.  To be completely fair the alien stuff when it occurs in the last half hour isn't bad, but it's too little too late and  it's undone by the found footage style that destroys the entire film.

This is the first worst film of 2014. Its so bad that I considered not reviewing it but I have a personal policy that if I ask for a screener and I get it I'll review the film.  I always feel bad about that until a publicist told me "never feel bad if you don't give a film a good review because if the filmmakers had wanted a good review they should have made a good movie".

Email ThisBlogThis!Share to TwitterShare to FacebookShare to Pinterest
Labels: ambivalent post, american, comedy, horror, not worth the effort, science fiction