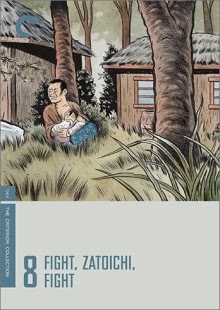 Fight, Zatoichi, Fight may be my favorite movie title in the 26-film Zatoichi series, though that may be personal preference. The simple three-word imperative is so catchy (and note that the most important word is used twice). It's a title that sounds as if someone is rooting for something to happen. Fight, Zatoichi, Fight also reminds of some other movies that use the similar (verb) (pronoun) (verb) pattern: Scream Blacula Scream, Run Lola Run, and, of course, Darkman III: Die Darkman Die. The Zatoichi film boldly dares to use commas.

Fight, Zatoichi, Fight is also one of my favorite films in the series so far. It tells a straightforward tale with an easy set up, it has its doses of broad comedy, and yet it's heartfelt throughout. That's three straight Zatoichi films that have stood out for me in a row, the previous two being Zatoichi and the Chest of Gold and Zatoichi's Flashing Sword. While the previous two entries were directed by Kazuo Ikehiro, Fight, Zatoichi, Fight was directed by Kenji Misumi, the director of the first Zatoichi film, The Tale of Zatoichi.

In a lot of ways, Fight, Zatoichi, Fight is yet another variation on the theme of doing good as a means of righting past wrongs (both in the here and now and in that cosmic/karmic sense). Zatoichi is pursued by killers looking to collect a bounty. This leads to the accidental death of an innocent mother with an infant in her arms. Zatoichi vows to take the baby back to its father in a distant village and to apologize for what's happened. During his noble journey, Zatoichi is pursued. There's gambling, there's a maybe-would-be love interest, and there's the usual pathos that Shintaro Katsu brings to his performance as the blind swordsman. Somehow the film negotiates these familiar contours and makes it feel special, and I don't think it's just the  inclusion of the cute kid. I think it's because every moment seems to matter a lot to Zatoichi. 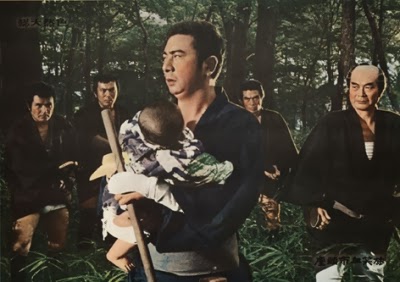 The pathos seems upped a notch in this film, and a lot of that has to do with Katsu's continued refinement of his performance and his deeper understanding of Zatoichi. Katsu invests himself wholly in both the slapstick and the chivalry of this situation. He was a gangster, but now he's a knight on a quest; he's a hardened killer, but now he's also a parent figure/guardian. There's something about Zatoichi changing a diaper and killing assassins simultaneously that warms the heart. Again, here are the contradictions at work in the blind man's soul. This added pathos may also be thanks to Misumi's return to the series after two years. I look forward to seeing more of Misumi's future Zatoichi films just to see if he has a certain handle on the character as a director that Katsu has as a performer.

What's surprising about Fight, Zatoichi, Fight are its little touches. Katsu's subtle gestures and hesitations are moving without being forceful. There's a tenderness in the character's heart, but it's one that can only be shown in fleeting glances. What seems like a throwaway gag in the opening credit has a strange resonance late in the film, which is constructed in cyclical manner much like the pattern of dark-to-light-to-dark in Zatoichi's life. Just consider what's in the way of Zatoichi's feet after a key moment near the end, and then think about the credits sequence that started the film. If this isn't an intentional callback, it's an all too fitting bit of bitter, melancholy serendipity.
Posted by Hubert at February 10, 2014