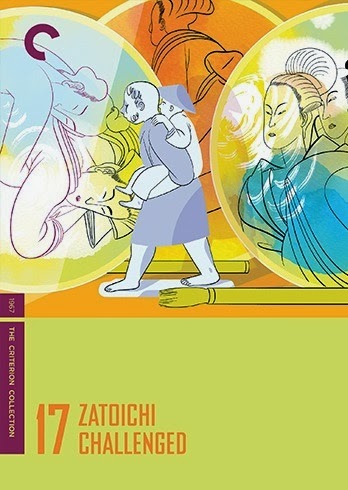 Speed bump in the Zatoichi film has a great opening third, a great last third and a deadly dull middle third. While good over all, and damn amazingly great in parts this is one of my least favorite of the entire series. The problem is that middle is way too talky and static.

I don't want to deal with the bad instead I'd like to highlight some of the good, beginning with some of the musical score. The opening guitar riffs make this feel like its going to be a kin to a spaghetti western and there are times when the film riffs on westerns, from its frontier town setting to the Shane echos at the ends.

While there really isn't any gambling in the film, there is a nice sequence where Ichi has to guess which hand a coin is in.

Actually to be honest the film's strong points is in the sequences, Ichi and the boy bonding, the opening fight on the road, the massive attack late in the game and the near perfect final confrontation in the snow between Ichi and the samurai who has become his friend. These are marvelous pieces which stick in my head way more than the film as a whole.

IS this a bad film? Most certainly not, but when you compare it to some of the highs in the Zatoichi series it seems not as good.

Definitely worth seeing, just don't expect one of the highs of the series.