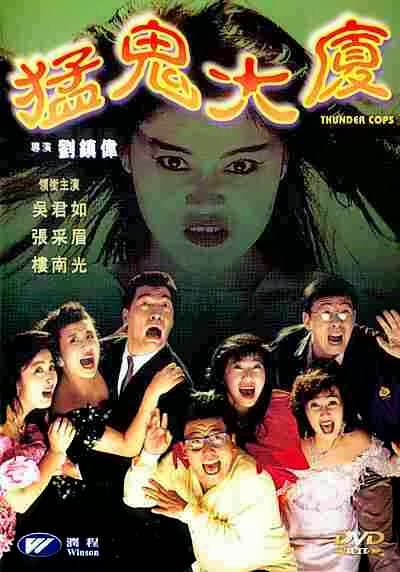 This is supposedly a sequel to a film called Operation Pink Squad with which it has almost no real connection. It also has a sequel called Thunder Cops 2 which it also has almost no connection (it features a top billed Stephen Chow who only shows up toward the end for a couple of minutes). The reason I'm telling you this is because if you read on this film almost every review will mention the connections and state how the film seems completely unconnected to them. I also mention it because you should know that you don't need to know about any other film to enjoy this.

The easiest explanation of the plot has a newly married couple not getting it on in the bedroom. He is too timid, having been warned off letting his wife he's inexperienced lest she laugh at him.  He is however very jealous and when her job as a police officer has her take part in a sting operation as an escort he follows along to try and catch her in some infidelity. Complications naturally arise first in that he misinterprets everything he over hears and secondly the building the sting is to take place in is haunted. Meanwhile a Buddhist monk has been brought in to catch the ghosts. Unfortunately one of the ghosts escapes before she can be locked away.

Broad humor mixes with supernatural chills in a film that is light on plot but big on wild and over the top action set pieces. The humor is a matter of taste and frequently falls flat. On the other hand the action set pieces are really good with the toy helicopter chase alone being worth the price of the DVD. The sequence involving toy helicopters chasing the flying head of the ghost is a wonder. The zombie attack that follows it isn't bad either-though how it's resolved has to be a zombie film first-elves.

Its a wild and wacky film that is, once it gets going, an absolute blast and a half. Track it down.
Posted by Steve Kopian at February 02, 2014