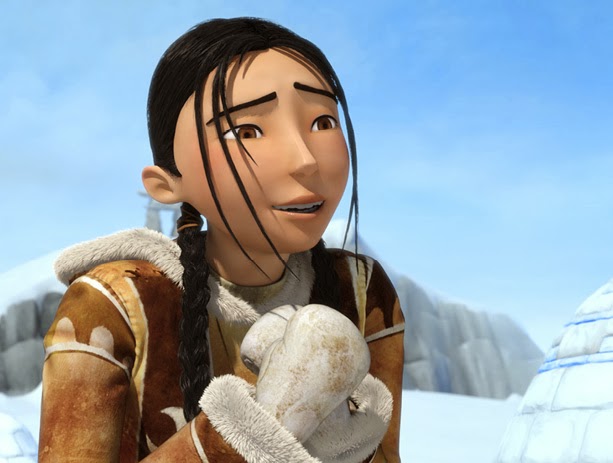 I returned to the BAM Kids Fest for the first time in two or three years and found it warm and friendly. The parents were cool, the kids well behaved and the atmosphere really cool. Of course it wasn't geared to a single grown up, but if I had a kid I'm sure they would have a good time.

The film I saw was THE LEGEND OF SARILA. Its about an Eskimo shaman (Christopher Plummer) who years before was heart broken when his sons were killed while hunting with another Eskimo. They had been struck by lightning but he still blamed the other hunter. He was so heart broken that he drove out his wife and has made every effort to kill the son of the now dead hunter. In an effort to get revenge he has contacted dark spirits so as a result the goddess who looks over the clan has caused the animals to stay away.  Three months on of no animals the shaman's ex-wife tells the tribe of Sarila, a land to the north where there is plenty of animals to hunt and other food is abundant. Figuring that no one will return from the journey the shaman sends the object of his hate, and unintentionally his two friends to find the lost land.

A really good story suffers from some okay animation. Perhaps its seeing what might otherwise be a direct to DVD film on the big screen, but the animation looks a tad anemic at times. Its serviceable and the animal designs are adorable. Actually once the trip is set in motion you won't care because by then you'll be hooked on the story and want to see how it comes out.

I recommend the film when it hits home video.

I do have to ask the people at BAM to do something about the woman who did the into to the film. I suspect it;s the same nincompoop who pissed me of the last time.  She came out and introed the film and spoke down to the kids,actually she spoke to the kids as if they were three years old. That would be fine, but most of the kids around me were around ten and they had looks on their faces as if they couldn't understand who this woman was. Several were laughing at her. I couldn't understand what she was doing since the film is supposed to be for 8 to 11 year olds and as I said  she treated them as if they were infants or stupid.

To be honest the last time I was really turned off by it and seeing it again left me puzzling over it. Why is this happening? I ask this in all seriousness since in two weeks the New York International Children's Film Festival starts and they never ever talk down to their audience. I've gone to I don't know how many NYICFF screenings over the years and never did anyone do what this woman seems to do at BAM. Get rid of her, kids don't deserve to be spoken to like they are stupid.

There ends the lecture.

And if you can forgive the twit, bring the kids and go to Kids Fest.
Posted by Steve Kopian at February 23, 2014