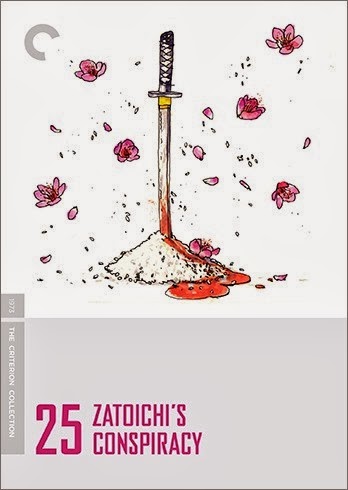 Final film in the original series is a return, largely, to the way the series was before the previous two entries with their trippy visuals and slightly disjointed story telling.While the film is a return to what made the series so good, it's also clear the series had lost it's way.

The plot has Ichi returning to his home town. While on the road he is escorted to an inn semi-forcibly. It seems a rich man has taken pity on him and paid for his stay at the inn. What the man doesn't know is that he knows the blind man from childhood, a fact he refuses to believe since it will complicate matters- he's trying to manipulate control of a local quarry. Not standing for the corruption Ichi stands against his old friend, and his yakuza swordsmen.

A solid entry in the series the film is a kind of coda to the series, though that really is the final film which was made some 16 years after this one (and echoes this one). Zatoichi goes home, and in someways so do we in the audience. As I said at the top this is a return to the top this is move back to straight forward filmmaking and away from the experimentation and a return to Zatoichi fighting corruption. He is not, for the first time in many entries a fugitive from the law hiding out.

However just as Zatoichi finds that all is not well at home, his "mother" has passed on, his friend is now corrupt, things are not as he remembered them, we in the audience have a similar reaction. there is a rote-ness to the story (we have been here before) and the tale has been tailored to fit "modern", ie 1973 audience tastes thanks to the introduction of some rebel rousing kids. While I could have forgiven the plot lines familiar story, the kids' story is intrusive (though I think largely to their dress and manner seeming out of place)

This is not to infer in any way that it's a bad film, it's not, it has some really good sequences including Ichi having to escape the mud that he was dumped in. this leads into his reappearance in the home of his enemy looking like a mummy of old. Truthfully the sense of dread and horror in some scenes and emotion in others is some of the best in in the whole series.

I would have loved to have see what the next film in the series would have been...but of course what followed this was the TV series.

Definitely worth tracking down.
Posted by Steve Kopian at February 27, 2014