When Stalingrad fires on all cylindaers its a violent gut punch of a film about the brutality of war. There are things in this film that blew my mind.  While the film suffers from modern day bookend sequences that belong in another film, the majority of the film is a solid war time drama with incredible action sequences

Stalingrad is the story of three days in November 1942. A large number of soldiers storm and seize a apartment building on the edge of the city that being used by German soldiers as spot to watch over some oil tanks. The building also over looks the way in to the city from the Volga and the Russian want it for that reason. Once they take the building the men are to hold it for three days until reinforcements arrive. Living in one of the apartments is a young girl who becomes friends with and is ultimately protected by many of the soldiers. At the same time the film tells the story of a German Captain who is haunted by a Russian girl who resembles his dead wife. Its a weird love hate relationship between the pair who really don't speak each others language, they hate what they do to each other and yet can't really live without each other. How the lives of all these people intersect over a few days is the film. 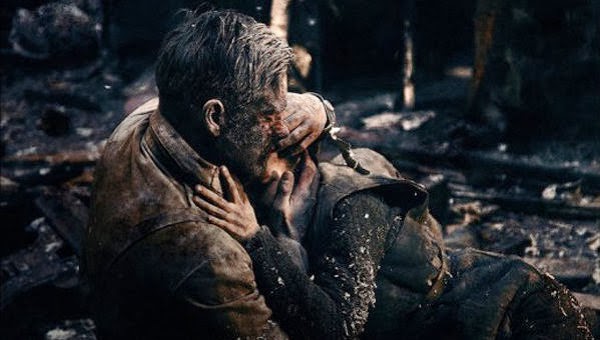 This is the first Russian film to be shot in IMAX 3D and director Feydor Bondarchuk has made one of the very few films that is actually enhanced by the 3D. No the film doesn't have things coming out at you, but the film's sense of space and place is greatly improved. We get a sense of being in a real place with real people. Yes the story would work with out the depth, but at the same time things are made more real.

To some extent the film is form over content with the battle sequences being more visceral triggers that reach into your gut and twist them up than carefully plotted and planned battles. The early sequences when the German lines are attacked by burning Soviet soldiers or the sacrifice before the battle are like nightmares out of Hieronymous Bosch. Actually all of the battle sequences are affecting even though they are never particularly graphic. At first it's because the filmmaking puts you into the battle, later, in the final sequences, its because we've become invested in the characters.

The film is an odd mix of realistic warfare, rah rah propaganda and old school (Hollywood) war films.  Its mix that doesn't always work, the gear shifts are never completely clean. From a story telling stand point it is kind of understandable since the film is a kind of memory film with the whole film being told by an older Russian man to a trapped girl in Japan. The story is not so much reality, but the story of his fathers (he says he has five) as told to him by his mother. The result  is a soapiness to some of the interactions  Since that is how his mother would have remembered it all.  From a filmmaking stand point I have the sense that some of  the non-battle scenes were constructed after watching some old WW2 films from Hollywood. Its not bad but it keeps a film with truly great sequences in it from being great all the way through since it doesn't fully mesh with the gritty action.

If you want the one glaring mistake or WTF thing in the whole film it's the framing device of the film. Why is the film framed as a story being told to someone in the aftermath of the Japanese earthquake and tsunami in 2011? There is no reason, especially since we never see the face of the person telling the story. For whatever reason, better or worse the device never manages to link past and present. Actually I don't think they ever make an effort to link the two with the result that when we shift back from 1942 to now film deflates.

Slight deflation aside this film is largely a kick ass war film. If the devil is in the details, then in this film the pleasure is in the war scenes. They are spectacular and I'm looking forward to seeing the film again on an IMAX screen just to see them.