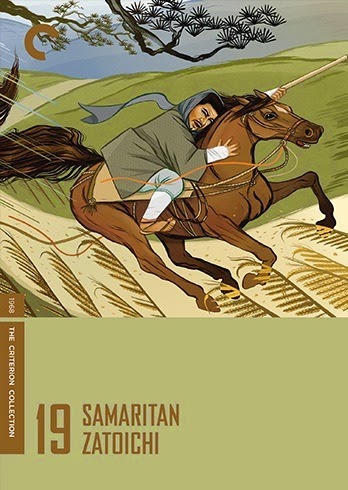 One of the best films in the series is a return to the  humanity that was lost in the previous film Zatoichi and the Fugitives. Sure there is darkness but it's not all encompassing.

The plot of the film has Ichi and his friend Sanuske becoming involved in a plot to kill a man who owes the yakuza money. Because the man is hiding in a dark house Ichi is the one to kill the man, but it was all a set up. The yakuza boss wanted the man dead so he could get his hands on the man's sister. Ichi then turns to protecting the woman until she can get to her aunts house.

Besides just being a damn good story, this is a meaty film, one that feels way meatier than you'd expect from an 82 minute film. Rolling around in the film are all sorts of notions relating to honor, obligation, forgiveness and making up for past wrongs. Never preachy the film simply tells you a good story while letting the audience think about what i right and what is wrong.

The film has several wonderful set pieces, all of the action is of course first rate, also first rate are sequences as the one early on when Ichi is eating in an inn and his friend tries to steal his meager fish. Another is a gambling scene that puts a spin on the typical dice game, and reveals Ichi isn't as honest as he usually seems.  The arcade sequence is another stand out, and is wonderfully touching.

I love the use of wide screen in this film. Every shot is beautifully composed and it amps up the emotion of the film frequently by bisecting or compartmentalizing the image in ways that says so much more than the dialog does (Watch the first scene when Ichi goes into the room at the inn with the woman he will soon be protecting.)

This is a great film by any standard and especially by the very high standard that is the Zatoichi series. A must see.
Posted by Steve Kopian at February 21, 2014