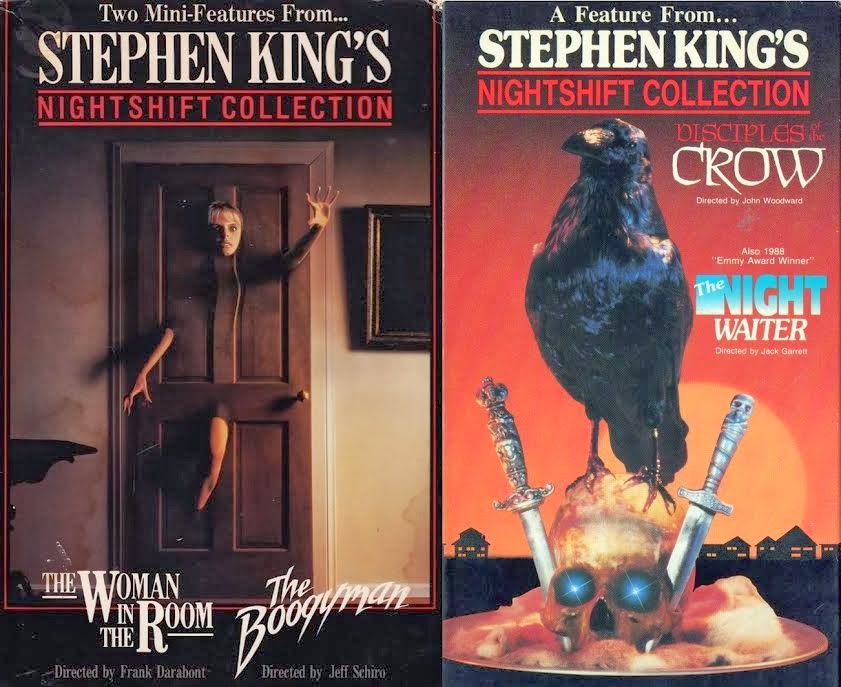 By 1977-78 Stephen King was only in the first phase of what would be a long and extremely successful career. With novels such as: Carrie, Salem's Lot, The Shining & The Stand already under his belt. King began to receive many requests from young, upstart filmmakers, wanting to bring his written work to film. Soon after, King formed the 'Dollar Deal' policy (aka Dollar Babies). With the permission of King, select filmmakers & students would have permission to adapt one of King's short stories (Novels not included) for just $1. The only catch being, King would keep the film rights to each one, and receive a video of the finished work.

February of 1978 saw the publication of a collection of short stories by King, called Night Shift. I've never read the book despite seeing some of the films that came from Night Shift. The Lawnmower Man, Graveyard Shift, & The Mangler later became theatrical full length features.

To gather a full list of 'Dollar Babies' that were filmed based on King's work would be nearly impossible and many of them have never been publicly seen. To my knowledge only a select few films, which all came from the Night Shift novel, were able to meet King's high expectations. Three of these stories: The Woman in the Room, The Boogeyman & Disciples of the Crow (Based on Children of the Corn) were released over a two videocassette series entitled Stephen King's Night Shift Collection.

Volume 1:
The Woman in the Room (1983) - Directed by Frank Darabont.
A middle-aged lawyer battles personal demons as his invalid, elderly mother lays dying in a hospital. With no help from his brother he must decide what is best for his ailing mother. So it's not surprising that Frank Darabont's film debut started with a Stephen King short. Considering that he created such brilliant film adaptions such as The Shawshank Redemption & The Green Mile. The Woman in the Room plays out as a serious drama about Euthanasia. Aside from a brief, creepy, hospital scene, there is not much horror to this film. Still, this is easily the best of the bunch.

Each actor is memorable despite the 30 minute running time. Most notable, is the terrific bit of dialogue between the lawyer and his client who is on death row for murder. The Woman in the Room is a great look into a young director's mind, who would later become one of Hollywood's top filmmakers as well, as the creator of television's The Walking Dead. Even King himself has gone on record saying that Darabont's short is the best short based on his work. 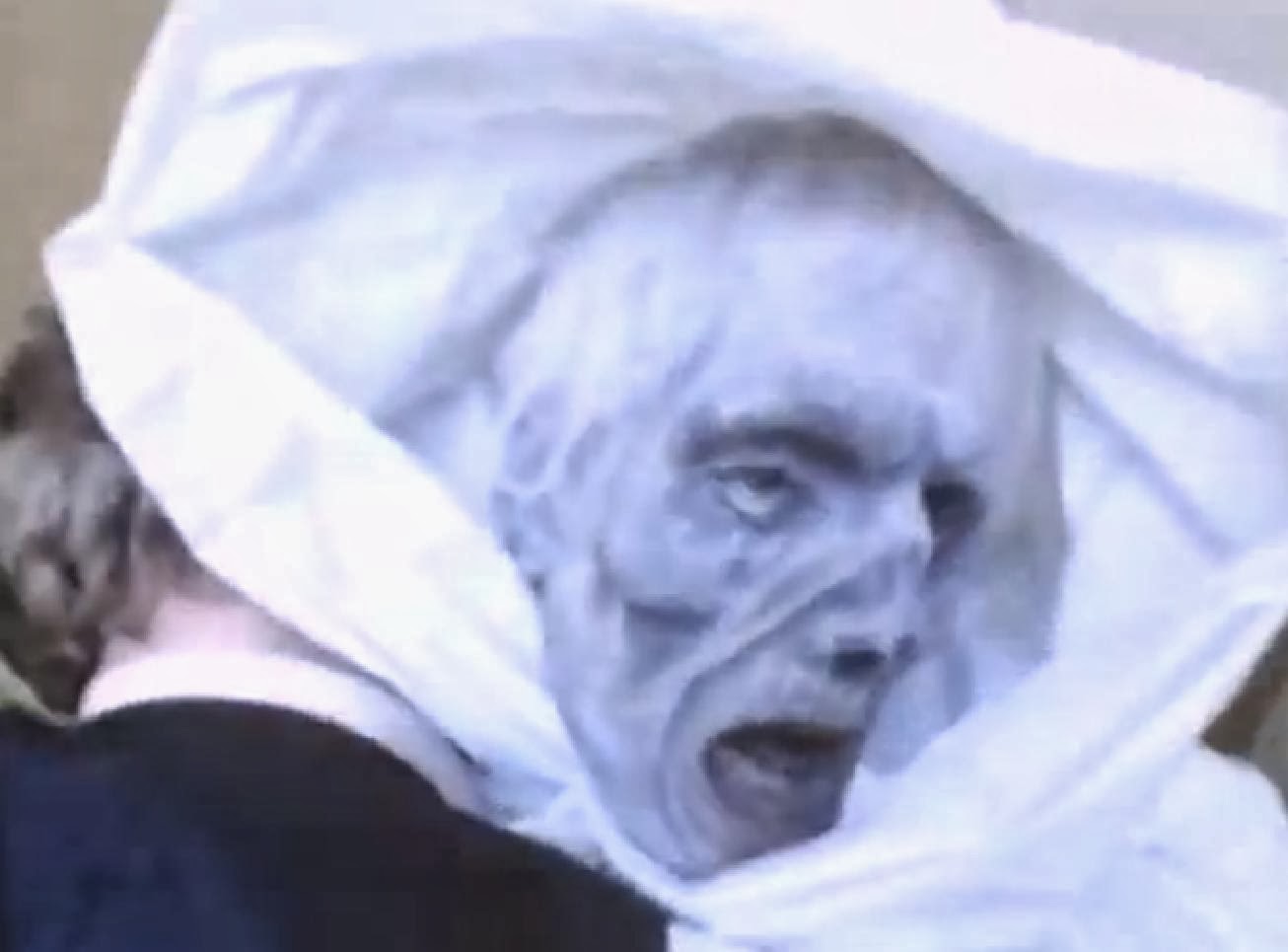 The Boogeyman (1982) - Directed by Jeff C. Schiro.
Is about a man who attempts to convince his psychiatrist that the Boogeyman is real and has been taking the life of his children. Schiro, who was a film student at N.Y.U. at the time, can certainly take credit for making the first known Stephen King 'Dollar Baby' short. Unfortunately, that's the only thing I can give him credit for.

Although, I've been told that this is one of the better stories from the Night Shift book. That being said, it's almost unfair to use this as an example because of it's poor execution. But when you have Stephen King's name attached to something, your setting the bar quite high for yourself. In my opinion, the low independent production value made it difficult to get into the story. With a bit more time and attention, The Boogeyman could have been something more. However, as you can safely assume with a title like The Boogeyman, this subject matter has been covered numerous times.

The Woman in the Room & The Boogeyman found their way onto VHS in 1986 via Granite Entertainment Group. The two films were packaged onto one videocassette, also known as Volume 1 of the Stephen King Night Shift Collection. However, thanks to Interglobal Home Video, both films managed to receive their own video release. At one time there were two different versions of Volume 1 and two different versions of Volume 2. Confused? You should be.

Volume 2:
Disciples of the Crow (1983) - Directed by John Woodward.
Tells the story of a couple passing through a small Oklahoma town and discover that it has been taken over by a cult of murderous children who worship a crow god. Based on the Night Shift story Children of the Corn, which would become a feature film one year later. Disciples of the Crow is a much smoother version of the tale.

For reasons that are lost on me, Children of the Corn has a built-in fan base among the horror crowd. Its nostalgic value is understandable but I would not describe it as Classic Horror. With a run time of less than 25 minutes, Disciples of the Crow manages to trim the fat and serves up more suspense than it's overweight companion. It's simplicity at it's finest. The Night Waiter (1987) - Directed by Jack Garrett.
Depicts a young man newly hired as the Service Waiter at the Bay View Hotel, but he soon comes into conflict with the sinister Night Clerk. This is the outcast story of the Night Shift Collection. This 'Dollar Baby' is not based on anything that Stephen King wrote. The Night Waiter was a short story written by the director Jack Garrett. One could argue this works in The Night Waiter's favor so there is nothing to compare it to. However, there are similarities to The Shining. Given this is a student film, the directing work is the top feature here. The sound and lighting quality are also key elements that give Garrett's film a high production value.

What remains in question is why this was included on a videocassette named Stephen King's Night Shift Collection. I do not have a definitive answer to that but I certainly have a theory. As previously mentioned The Night Waiter resembles Stanley Kubrick's The Shining. King may not approve of it, but The Shining remains one of his most memorable film adaptations. Perhaps The Night Waiter was just better than most of the King 'Dollar' shorts that were made. In 1989, Karl James Associates paired Disciples of the Crow & The Night Waiter together for a second (unofficial) volume.

None of the Stephen King Night Shift Collection's have ever been officially released on DVD. The only sources of this collection are on VHS and arranged according to distributors preferences. So it's quite difficult to find copies of the Night Shift Collection in it's original order. There was even a 1995 videocassette release containing only The Woman in the Room & The Boogeyman! Now THAT is a nightmare, even King could not conjure!
Posted by Robert Grimes at February 03, 2014