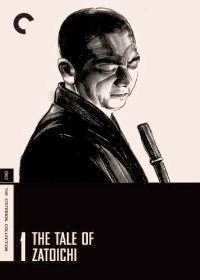 I first saw a Zaotichi film in high school, though I don't know which one it was. I only have vague memories of scenes and plot points. There was the requisite "cheat the blind man" moment by some rogue on the road, and maybe some sort of romance that can't be fulfilled; obviously there was reverse-grip sword fighting, and I want to say a daring evade that involved blowing a tic into someone's eyeball. (I really hope I'm not just making that last bit up.) Whatever Zatoichi film it was, it definitely wasn't the first one, The Tale of Zatoichi. I wound up watching The Tale of Zatoichi some time in college at least a dozen years ago, so my memory is foggy here as well. Something about a gang war with Zatoichi taking one side and a sick samurai taking the other.

Despite my bad memory about the handful of Zaotichi films I've seen, what endures is Shintaro Katsu's performance as the eponymous blind swordsman. I remember Zatoichi, just not all of the other stuff around him. It says something about Zatoichi and Katsu, I think, and less about slipping in my old age.

Zatoichi is so fully realized in performance and mannerism by the first 10 minutes that any quirk that comes after seems natural to the character. Take that shut-eyed look of Katsu's that breaks occasionally for emphasis--when his eyes open, and they're maybe just a slight bit strabismic, it's the same thing as italics. Zatoichi has a penchant for the seemingly unintentional dig as he blindly assesses his surroundings. He calls out scoundrels, suggests that he was attacked by a nobody, dismisses people as if they were nothing. But it's clear that these are intentional digs that he hopes to disarm by virtue of being blind--his blindness is a kind of weapon. His sword is just an extension of this idea, the blade hidden in a walking stick, and wielded with a reverse grip so he can come in close and read the danger of the moment in a swish of air or graze of fabric. Through all these details and affectations, Katsu perfectly realizes the logic of a character who is an impossible fiction. 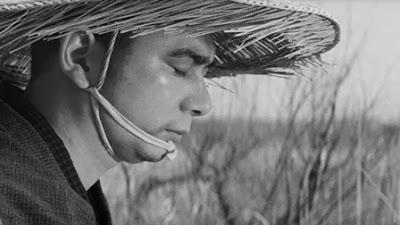 But it's not just the outward contours of Zatoichi's character that I remember. It's odd that I can't recall the plot of The Tale of Zatoichi, because the plot of this film is the stuff that allows an exploration of the interior life of Zatoichi. There amid the gang war we meet this walking contradiction. In one of the film's comic inversions, Zatoichi the blind former-masseur receives a massage from someone much higher on the class scale. In the interactions between Zatoichi and Hirate, there's the classic example of enemies by principle rather than by legitimate reason. If the two of them weren't hired by rival gangs, they'd probably make great fishing buddies, but they live their lives by strict codes.

The various dilemmas of Zatoichi may seem like low drama in a lesser actor's hands, yet Katsu buys into the reality of this character full of contradictions, and in doing so makes Zatoichi believable. I understand that his meekness hides odd strength, and his little stumbles conceal a conman guile, and his sword-for-hire criminality is still underlined by a kind of righteousness. Maybe the reason I forgot so much of the plot of The Tale of Zatoichi is because the film seems less about the swordplay and more about the interplay of disjunctions going on within and around the blind swordsman. Maybe I remembered what was most important: Zatoichi himself.

A 26-film run as the character (followed by 100 episodes on TV) makes Katsu's Zatoichi seem less like James Bond or Wong Fei-Hung. He's probably not even quite like Charlie Chaplin's Little Tramp. Given Katsu's portrayal and I'm assuming a certain amount of continuity between films (we'll see about that), I'm more inclined to think of Zatoichi in terms of comic book characters, i.e., Wolverine, Batman, Daredevil, and so on. What'll be fascinating as the Zatoichi series unfolds is to observe how Zatoichi holds up as time goes by and as he becomes involved in different kinds of stories. In the center of it all is Katsu, who seems like the sturdiest anchor that a series about an unforgettable badass could have.
Posted by Hubert at February 03, 2014